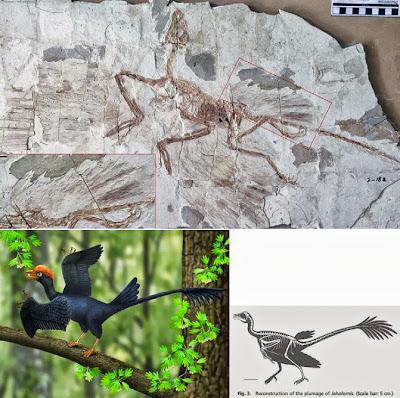 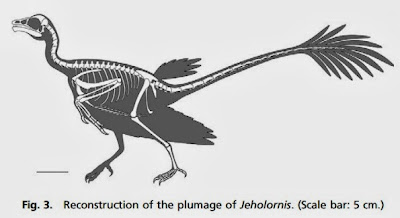 We describe the presence of essentially two functional tails in the Early Cretaceous Jeholornis (the second most primitive bird)—one like that of some modern birds with a fan-shaped tract of feathers over the proximal tail vertebrae and another distal frond like that of feathered dinosaurs such as Caudipteryx and Microraptor. We suggest that the unique “two-tail” plumage in Jeholornis probably evolved as the result of complex interactions between natural and sexual selective pressures and served both aerodynamic (flight and balance, etc.) and ornamental functions (communication/display, etc.). Our aerodynamic analysis also provides a plausible functional explanation for the elongation of the boney tail in Jeholornis relative to Archaeopteryx.

Abstract
The Early Cretaceous bird Jeholornis was previously only known to have a distally restricted ornamental frond of tail feathers. We describe a previously unrecognized fan-shaped tract of feathers situated dorsal to the proximal caudal vertebrae. The position and morphology of these feathers is reminiscent of the specialized upper tail coverts observed in males of some sexually dimorphic neornithines. As in the neornithine tail, the unique “two-tail” plumage in Jeholornis probably evolved as the result of complex interactions between natural and sexual selective pressures and served both aerodynamic and ornamental functions. We suggest that the proximal fan would have helped to streamline the body and reduce drag whereas the distal frond was primarily ornamental. Jeholornis reveals that tail evolution was complex and not a simple progression from frond to fan.