Biodiversity in the cloud forests of South America are renowned for producing a seemingly constant parade of beautiful, bizarre creatures. One such tropical oddity is the Pinocchio Lizard, Anolis proboscis, which was once presumed extinct and recently spotted by a team of biologists in Ecuador for only the third time in 15 years.

After three years of searching for this oddity, a group of photographers and researchers from TropicalHerping.com, Paolo Escobar, Lucas Bustamante, Diana Troya and Alejandro Arteaga were finally able to document and photograph this lizard in January of this year.

Known as the Ecuadorian Horned Anole, this bizarre creature  earns its title because of a rhinoceros like protuberance that grows out of its snout.

As you might guess, its common name was coined for its resemblance to a particular wooden puppet when he wasn’t being honest.

First discovered in 1953, this unique animal was only seen on a handful of occasions for the following 15 years and was thought to have gone extinct until being rediscovered in 2005 by a group of birdwatchers that noticed one crossing a road. Another expedition summer of 2010 led by Jonathan Losos, a herpetologist from Harvard leading a group of herpetologists from Belgium, Ecuador, and the United States also found the anole.

The Pinocchio Lizard goes largely unseen due to its cryptic camouflage that helps it blend into the dense vegetation of the cloud forest. The team got around this by looking for the lizards at night instead of during the day because diurnal anoles are apparently much easier to find after dark (who would have thought?).

While Ecuadorian Horned Anoles and other day anoles hide in  plain sight during the day, they turn a pale, easy to spot whitish color when lit up with a headlamp at night! 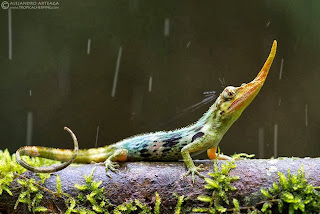