Abstract
In Australia, microhylid frogs are found almost exclusively in the tropical north-east, but in this region diversity is high. Sixteen species occur in the Wet Tropics region and a further six species are found further north on Cape York Peninsula. Most Australian microhylid species belong to the genus Cophixalus (18 species). The majority of these have highly localized distributions, with two-thirds being found on single mountain ranges. While most Cophixalus are small (10–29 mm snout to vent length) rainforest species, four differ dramatically in morphology and ecology, being large (30–53 mm) species that inhabit isolated areas of jumbled boulder-pile habitat. Here I describe a new species of Cophixalus from boulder-pile habitat in the Melville Range on Cape Melville, north-east Cape York Peninsula. Cophixalus petrophilus sp. nov. is highly distinct from all congeners in morphology, colour pattern and mating call. This species is restricted to deeply piled granite boulder habitat that is largely devoid of vegetation. As for the other four boulder-pile Cophixalus, C. petrophilus sp. nov. is large and shows other similar morphological adaptations to this unique habitat (e.g., long limbs, large finger discs). However, it is notable in that it is the smallest of the boulder-pile species (26–32 mm) and it has particularly large eyes. I speculate that the latter trait is an adaptation to dimly lit conditions deep within the boulder-field. Cophixalus petrophilus sp. nov. was only found in exposed boulder habitat, whereas the co-occurring boulder species, C. zweifeli, was found using forested areas on and adjacent to the boulder-fields at night. Cape Melville is the only boulder-field with two co-occurring boulder Cophixalus and it appears that there is habitat partitioning between them. Cophixalus petrophilus sp. nov. has a highly localised distribution but appears common within this and is probably secure.

Etymology. From the Latin, petrophilus refers to ‘rock-loving’, in recognition of the restriction of this species to boulder-field habitat. The species epithet is treated as a noun in apposition. 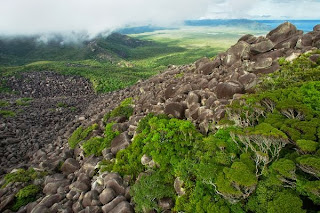 Gecko that looks like a leaf among new species found in Australia's 'lost world'
http://gu.com/p/3jqmg/tw via @guardian