Abstract
A rhacophorid frog from Borneo is divergent genetically and morphologically from Javanese R. reinwardtii, with which it was formerly confused, and is recognized as a distinct species. The frog differs from R. reinwardtii by an immaculate green dorsum and a black posterior thigh surface, which is studded with sky blue spots in the female. Because the frog is also divergent genetically and morphologically from the other congeners recently split from R. reinwardtii, we describe it as a new species, R. borneensis.

Etymology: The specific name refers to the island of Borneo, where the new species was found.

Natural History: In Camel Trophy, an amplectant pair of the type specimens were found at night perching on a tree branch (<1 m) extending above the surface of a shallow pool (3–5 m×10 m). The air temperature before the time of finding was 24C. No tadpoles or eggs were found in the pond and calling males were absent in early March. Frogs found associated with R. borneensis included Kurixalus appendiculatus (Günther, 1858), Polypedates macrotis (Boulenger, 1891), Chiromantis sp., and M. petrigena Inger and Frogner, 1979. 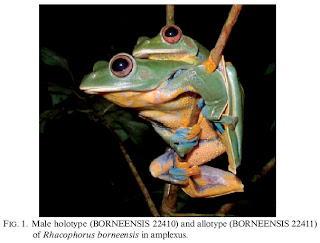