The earliest evolution of mammals and origins of mammalian features can be traced to the mammaliaforms of the Triassic and Jurassic periods that are extinct relatives to living mammals. Here we describe a new fossil from the Middle Jurassic that has a mandibular middle ear, a gradational transition of thoracolumbar vertebrae and primitive ankle features, but highly derived molars with a high crown and multiple roots that are partially fused. The upper molars have longitudinal cusp rows that occlude alternately with those of the lower molars. This specialization for masticating plants indicates that herbivory evolved among mammaliaforms, before the rise of crown mammals. The new species shares the distinctive dental features of the eleutherodontid clade, previously represented only by isolated teeth despite its extensive geographic distribution during the Jurassic. This eleutherodontid was terrestrial and had ambulatory gaits, analogous to extant terrestrial mammals such as armadillos or rock hyrax. Its fur corroborates that mammalian integument had originated well before the common ancestor of living mammals. 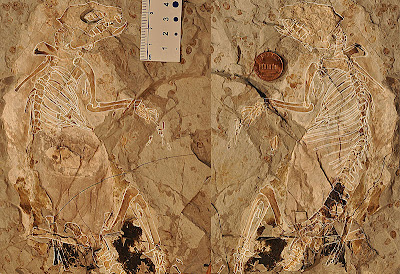 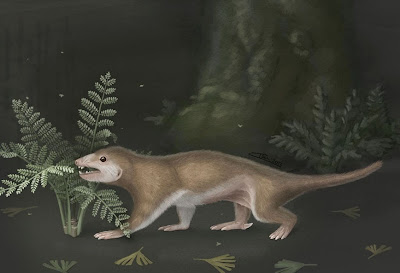