A new basal ornithopod dinosaur, based on two nearly complete articulated skeletons, is reported from the Lujiatun Beds (Yixian Fm, Lower Cretaceous) of western Liaoning Province (China). Some of the diagnostic features of Changmiania liaoningensis nov. gen., nov. sp. are tentatively interpreted as adaptations to a fossorial behavior, including: fused premaxillae; nasal laterally expanded, overhanging the maxilla; shortened neck formed by only six cervical vertebrae; neural spines of the sacral vertebrae completely fused together, forming a craniocaudally-elongated continuous bar; fused scapulocoracoid with prominent scapular spine; and paired ilia symmetrically inclined dorsomedially, partially covering the sacrum in dorsal view. A phylogenetic analysis places Changmiania liaoningensis as the most basal ornithopod dinosaur described so far. It is tentatively hypothesized that both Changmiania liaoningensis specimens were suddenly entrapped in a collapsed underground burrow while they were resting, which would explain their perfect lifelike postures and the complete absence of weathering and scavenging traces. However, further behavioural inference remains problematic, because those specimens lack extensive sedimentological and taphonomic data, as it is also the case for most specimens collected in the Lujiatun Beds so far. 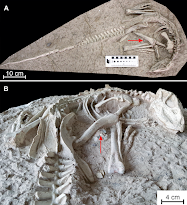 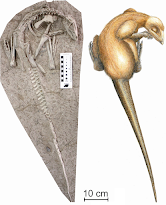 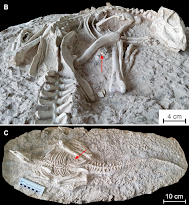 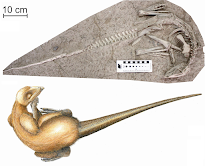 ....
Conclusions:
Changmiania liaoningensis nov. gen., nov. sp., from the Lower Cretaceous Lujiatun Beds of western Liaoning Province (China), is placed at the base of the clade Ornithopoda. The perfect preservation of the skeleton of both its holotype and referred specimen in a lifelike posture implies that the animals were rapidly entombed while they were still alive. Although its hindlimb proportions indicate that Changmiania was an efficient cursorial dinosaur, some of is diagnostic features are tentatively interpreted as adaptations to a fossorial behavior. It is therefore tentatively hypothesized that both Changmiania specimens were suddenly entrapped in a collapsed underground burrow while they were resting.
Yuqing Yang, Wenhao Wu, Paul-Emile Dieudonné and Pascal Godefroit​. 2020. A New Basal Ornithopod Dinosaur from the Lower Cretaceous of China. PeerJ. 8:e9832 DOI: 10.7717/peerj.9832
Eternal Sleep: Dinosaurs Died Underground, Fossils Perfectly Preserved
naturalsciences.be/en/news/item/19274
twitter.com/RBINSmuseum/status/1303294215808528390 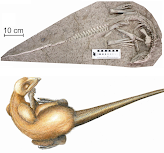