Abstract
Sebecosuchia was a group of highly specialized cursorial crocodyliforms that diversified during the Cretaceous and persist until the end of the Miocene. Their unique combination of cranial and post-cranial features indicates that they were active terrestrial predators that occupied the apex of the Late Cretaceous terrestrial ecosystems, even competing with theropod dinosaurs. Here, we report the discovery of the earliest sebecid worldwide, and the first from Eurasia, Ogresuchus furatus gen. et sp. nov., based on a semi-articulate specimen located in a titanosaurian sauropod nesting ground. The new taxon challenges current biogeographical models about the early dispersal and radiation of sebecid crocodylomorphs, and suggests an origin of the group much earlier than previously expected. Moreover, the new taxon suggests a potential convergent evolution between linages geographically isolated. Taphonomic evidences suggest that Ogresuchus died almost in the same place where fossilized, in a dinosaur nesting area. Biometric and morphologic observations lead to speculate that Ogresuchus could easily predate on sauropod hatchlings. 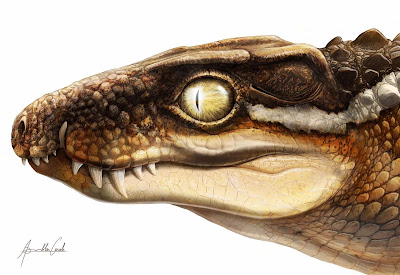 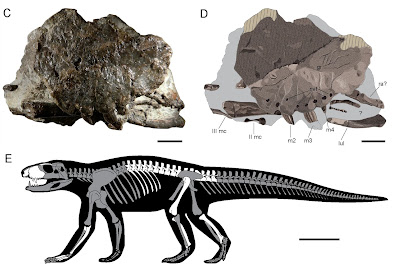