Abstract
Two species of Bush Vipers, genus Atheris Cope, 1862, have been reported for the continental island of Bioko, Gulf of Guinea – Atheris squamigera and a putatively undescribed species, morphologically similar to Atheris chlorechis. The latter was only known from one specimen collected in the early 1900s and its taxonomic identity has never been fully resolved. Based on recently collected specimens of Atheris from Bioko Island, we reviewed all the available data and specimens through detailed morphological comparisons against all known species of the genus. Our results confirm that Atheris squamigera is present in Bioko Island, and that the second taxon is a new species, which we describe here as Atheris hetfieldi sp. nov. The newly described species presents a series of morphological characters that clearly differentiate it from all of its congeners. The description of this new species is the first of a new snake species from Bioko in more than 100 years and this species is the only snake currently recognized as endemic to the island. 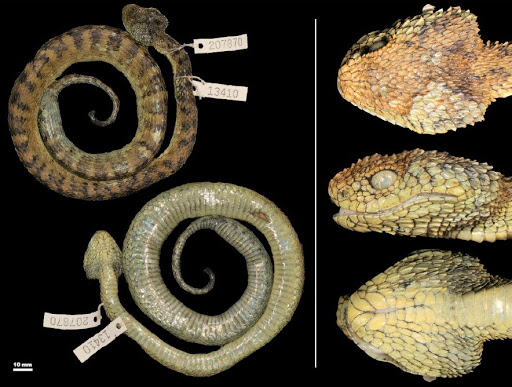