Abstract
A new species of Moenkhausia is described from Rio Curicuriari and Rio Tiquié, both right-bank tributaries of the upper Rio Negro basin, Amazonas State, Brazil. The new taxon differs from all congeners, except M. agnesae and M. beninei, by the combination of a sinuous humeral blotch, similar to a compressed letter Z, and distinct dark longitudinal stripes along the body sides. The new species can be distinguished from M. agnesae and M. beninei by the presence of a single humeral blotch and of longitudinal stripes running through the center of the scales, more conspicuous dorsally. 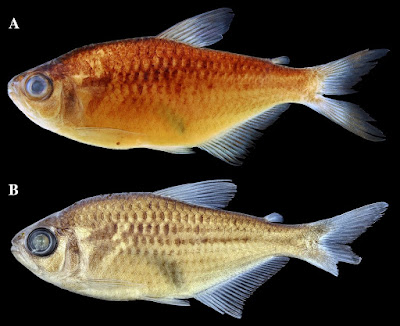 Common name.— Moenkhausia bellasomniosa is called ‘‘batiawu’’ by the Tukano Indians, a name employed for the species in the middle Rio Tiquié basin. However, in the upper Rio Tiquié the same name is employed for a congener, M. comma (Lima et al., 2005).

Etymology.— The specific epithet bellasomniosa comes from the Latin, meaning sleeping beauty (bella, pretty; somniosa, sleepy). It is an allusion to the Serra do Curicuriari, a granitic massif situated immediately to the south of the eponymous Rio Curicuriari, composed by three peaks, ranging from 800– 1000 meters a.s.l. The Serra do Curicuriari provides majestic scenery when viewed from the city of São Gabriel da Cachoeira, situated upstream in the Rio Negro, where it is dubbed ‘‘Bela adormecida’’ (sleeping beauty) due to its perceived rough resemblance to a lying young woman. An adjective