Rebbachisaurids are a group of basal diplodocimorph sauropods that diversified in Gondwana at the end of the Early Cretaceous and the beginning of the Late Cretaceous. It is a group of great palaeobiogeographical interest, for it  clearly illustrates various processes of dispersal throughout Gondwana and to Laurasia prior to the breakup of Africa and South America. However, the relationships within the group are still under discussion owing to the scarcity of cranial material that would help clarify them. In the present paper we describe the new rebbachisaurid Lavocatisaurus agrioensis gen. et  sp. nov. from the Aptian–Albian (Lower Cretaceous) of Neuquén (Argentina). Remains have been recovered belonging to an adult specimen (holotype) and two immature specimens (paratypes). Taken together, almost all the bones of the taxon are represented, including most of the cranium. Lavocatisaurus agrioensis gen. et sp. nov. is the first rebbachisaurid from Argentina with an almost complete cranium, making it possible to recognize differences with respect to other rebbachisaurids, such as the highly derived Nigersaurus. Among its most notable characters are the presences of a large preantorbital fenestra and maxillary teeth that are significantly larger than those of the dentary. Our phylogenetic study places Lavocatisaurus amongst basal rebbachisaurids, as the sister lineage to Khebbashia (the clade formed by Limaysaurinae + Rebbachisaurinae). This position, which is somewhat more derived than that previously suggested for Comahuesaurus and Zapalasaurus (the Argentinean rebbachisaurids closest in geographical and geological terms), reaffirms the presence of different basal rebbachisaurid lineages in the Early Cretaceous of Patagonia.

Etymology: In honour of the French researcher René Lavocat (1909–2007), who described Rebbachisaurus, the first known representative of Rebbachisauridae.

Etymology: In reference to the locality of Agrio del Medio, from which the new species was found

Conclusions:
Lavocatisaurus agrioensis is the first of the South American rebbachisaurids that preserves the rostral region of the cranium, which has allowed us to undertake a reliable enough reconstruction of the skull. The skull has a combination of morphological characters that justifies its definition as a new taxon within Rebbachisauridae along with the less derived rebbachisaurids from the Early Cretaceous of Argentina such as Zapalasaurus and Comahuesaurus. Our phylogenetic study situates Lavocatisaurus as the sister lineage of Khebbashia (Fig. 5). Lavocatisaurus is the most derived basal rebbachisaurid known to date, providing reliable information on the evolutionary steps that occurred just prior to the diversification of Rebbachisaurinae. 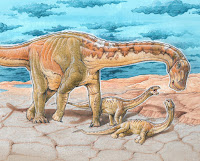