[Paleontology • 2018] The Smallest Biggest Theropod Dinosaur: A Tiny Pedal Ungual of A Juvenile Spinosaurus from the Cretaceous of Morocco

Abstract
We describe a nearly complete pedal ungual phalanx, discovered in the Kem Kem Beds (Cenomanian) of Tafilalt region, south-eastern Morocco. The bone is symmetric, pointed, low, elongate, and almost flat ventrally in lateral aspect. This peculiar morphology allows to refer the specimen to the smallest known individual of the genus Spinosaurus. The bone belongs to an early juvenile individual and it is proportionally identical to the ungual of the third digit of a large partial skeleton recently found, suggesting an isometric growth for this part of the pes and the retention of peculiar locomotor adaptations—such as traversing soft substrates or paddling—during the entire lifespan. 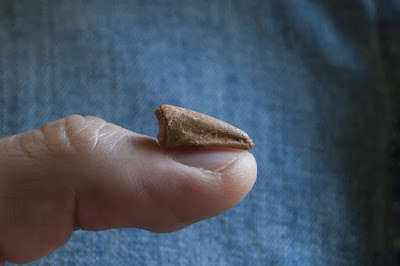 MSNM V6894 strongly resembles the pedal ungual phalanges associated to diagnosable skeletal remains of specimen FSAC-KK18888, described by Ibrahim et al. (2014) and defined as the neotype of S. aegyptiacus. MSNM V6894 shares with FSAC-KK18888 the following diagnostic characters: pedal unguals with flat plantar surface; pedal unguals broader than deep with length almost four times of the proximal depth. The overall morphology, proportions, and pattern of furrows are also very similar (see “Description and comparisons”). Following Ibrahim et al. (2014) we refer the ungual MSNM V6894 to cf. S. aegyptiacus. The variability found in cervicodorsal vertebrae (Evers et al., 2015) and quadrates (Hendrickx, Mateus & Buffetaut, 2016) might indicate a higher diversity among the spinosaurid material from the Albian–Cenomanian of North Africa than previously recognized. This proportional and morphological diversity may be related to individual variability or sexual dimorphism, or it could be above the species level. However, taking into account the low number of the known specimens, their low degree of completeness, their apparently strict taxonomic affinities, their occurrence in the same strata (or, more often, their uncertain stratigraphic provenance), and all the difficulties and controversies in investigating these aspects and, ultimately, in defining a species in palaeontology, we prefer to regard all the spinosaurid material (including pedal unguals) from the Kem Kem Beds as belonging to cf. S. aegyptiacus, pending more complete, articulated remains and reliable geological data. Further comments on this topic are beyond the purpose of this paper.

Locality: MSNM V6894 comes from some kilometers south of Erfoud, between the villages of Taouz and Begaa, Errachidia Province, Morocco (Fig. 1). 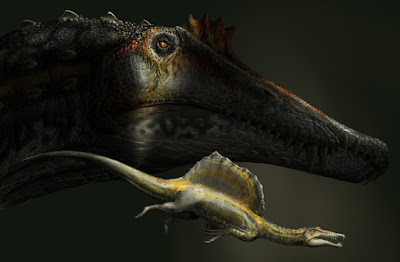 Conclusion
The specimen described here improves the knowledge about the appendicular skeleton of the spinosaurid theropods from the Kem Kem Beds (Late Cretaceous of Morocco) published by Ibrahim et al. (2014).

The new material indicates that the pedal ungual phalanges of Spinosaurus grew with isometry and it documents the smallest individual referable to Spinosaurus, a genus/taxon usually indicated as the longest if not the largest theropod dinosaur (Dal Sasso et al., 2005). The specimen FSAC-KK18888, with an estimated body length of 11 m, has an ungual phalanx of digit III that is 130 mm long. Assuming isometry—although isometrical scaling of the other parts of the spinosaur hind limb skeleton shown in Fig. 3 must be considered as tentative—the 21 mm long ungual MSNM V6894 would pertain to an early juvenile individual, 1.78 m long (Figs. 3B–3D), that is half the estimated length of the smallest Spinosaurus published up to date, represented by the isolated quadrate MNHN KK374 (Hendrickx, Mateus & Buffetaut, 2016).

According to Ibrahim et al. (2014), the unguals in Spinosaurus are reminiscent of the flattened pedal unguals of shorebirds that do not perch (Manegold, 2006), and the whole foot may have been adapted to traversing soft substrates or webbed for paddling. We agree with this hypothesis although it needs to be tested in the future based on more complete fossil remains and biomechanical analyses. The isolated tiny ungual here referred to a small, early juvenile of Spinosaurus indicates that the pes had the same locomotor adaptations observed in large individuals, that were probably achieved early in ontogeny and retained for the entire lifespan. 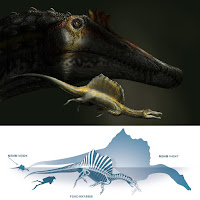 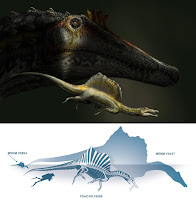