Abstract
A new fossil amniote from the Fossil Forest of Chemnitz (Sakmarian-Artinskian transition, Germany) is described as Ascendonanus nestleri gen. et sp. nov., based on five articulated skeletons with integumentary preservation. The slender animals exhibit a generalistic, lizard-like morphology. However, their synapsid temporal fenestration, ventrally ridged centra and enlarged iliac blades indicate a pelycosaur-grade affiliation. Using a renewed data set for certain early amniotes with a similar typology found Ascendonanus to be a basal varanopid synapsid. This is the first evidence of a varanopid from Saxony and the third from Central Europe, as well as the smallest varanopid at all. Its greatly elongated trunk, enlarged autopodia and strongly curved unguals, along with taphonomical observations, imply an arboreal lifestyle in a dense forest habitat until the whole ecosystem was buried under volcanic deposits. Ascendonanus greatly increases the knowledge on rare basal varanopids; it also reveals a so far unexpected ecotype of early synapsids. Its integumentary structures present the first detailed and soft tissue skin preservation of any Paleozoic synapsid. Further systematic results suggest a varanodontine position for Mycterosaurus, the monophyly of South African varanopids including Anningia and the distinction of a skeletal aggregation previously assigned to Heleosaurus, now renamed as Microvaranops parentis gen. et sp. nov. 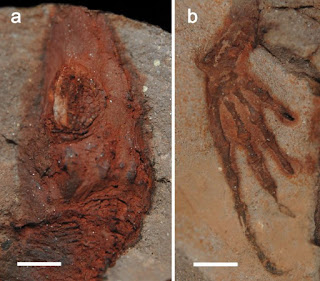 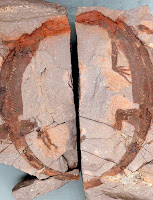 Remarks. Spelling after Reisz and Dilkes 2003,
replacing ‘Varanopsidae’ (Romer and Price 1940) and
‘Varanopseidae’ (Langston and Reisz 1981).


Etymology. Latin for 'climbing dwarf,' with epithet honoring Mr. Knut Nestler, citizen scientist from Chemnitz, who passed away in 2016 after decades of friendship and deeply appreciated cooperation with the Chemnitz Museum.

Abstract: The palaeontological collection of Chemnitz has been a constantly growing, developing and limitless source of knowledge on the relation of earth’s history and the development of life on earth, for over three centuries. Initially founded by science interested citizens on a voluntary basis, only with the premise to enable public access to collections and scientific information, it has developed and has been structuralized based on professional geoscientific considerations. Today, the collection is preserved, added to through selected purchases, diversely used and it serves as a foundation for globally linked up scientific research, as well as for interdisciplinary exhibitions and diverse educational programs and activities. The essence of the collection documents the evolution and preservation of terrestrial ecosystems with a special emphasis on volcanic environments and petrified wood.