Highlights:
• Hawaiian stick spiders show adaptive radiation with repeated evolution of ecomorphs
• This phenomenon is found in only a few adaptive radiations of island insectivores
• Camouflage against a finite set of predators and wandering habit play key roles
• Limited pathways for the development of color contribute to deterministic evolution

Summary
Insular adaptive radiations in which repeated bouts of diversification lead to phenotypically similar sets of taxa serve to highlight predictability in the evolutionary process. However, examples of such replicated events are rare. Cross-clade comparisons of adaptive radiations are much needed to determine whether similar ecological opportunities can lead to the same outcomes. Here, we report a heretofore uncovered adaptive radiation of Hawaiian stick spiders (Theridiidae, Ariamnes) in which different species exhibit a set of discrete ecomorphs associated with different microhabitats. The three primary ecomorphs (gold, dark, and matte white) generally co-occur in native forest habitats. Phylogenetic reconstruction mapped onto the well-known chronosequence of the Hawaiian Islands shows both that this lineage colonized the islands only once and relatively recently (2–3 mya, when Kauai and Oahu were the only high islands in the archipelago) and that the distinct ecomorphs evolved independently multiple times following colonization of new islands. This parallel evolution of ecomorphs matches that of “spiny-leg” long-jawed spiders (Tetragnathidae, Tetragnatha), also in Hawaii. Both lineages are free living, and both have related lineages in the Hawaiian Islands that show quite different patterns of diversification with no evidence of deterministic evolution. We argue that repeated evolution of ecomorphs results from a rugged adaptive landscape, with the few peaks associated with camouflage for these free-living taxa against the markedly low diversity of predators on isolated islands. These features, coupled with a limited genetic toolbox and reduced dispersal between islands, appear to be common to situations of repeated evolution of ecomorphs. 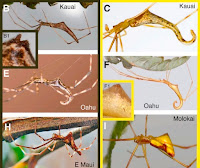