Highlights
• A new armored dinosaur is described based on an exceptionally preserved specimen
• Abundant in situ osteoderms with keratinous sheaths and scales are preserved
• Reddish-brown coloration and crypsis in the form of countershading are indicated
• Crypsis indicates strong predation pressure on this large, heavily armored dinosaur

Summary
Predator-prey dynamics are an important evolutionary driver of escalating predation mode and efficiency, and commensurate responses of prey. Among these strategies, camouflage is important for visual concealment, with countershading the most universally observed. Extant terrestrial herbivores free of significant predation pressure, due to large size or isolation, do not exhibit countershading. Modern predator-prey dynamics may not be directly applicable to those of the Mesozoic due to the dominance of very large, visually oriented theropod dinosaurs. Despite thyreophoran dinosaurs’ possessing extensive dermal armor, some of the most extreme examples of anti-predator structures, little direct evidence of predation on these and other dinosaur megaherbivores has been documented. Here we describe a new, exquisitely three-dimensionally preserved nodosaurid ankylosaur, Borealopelta markmitchelli gen. et sp. nov., from the Early Cretaceous of Alberta, which preserves integumentary structures as organic layers, including continuous fields of epidermal scales and intact horn sheaths capping the body armor. We identify melanin in the organic residues through mass spectroscopic analyses and observe lighter pigmentation of the large parascapular spines, consistent with display, and a pattern of countershading across the body. With an estimated body mass exceeding 1,300 kg, B. markmitchelli was much larger than modern terrestrial mammals that either are countershaded or experience significant predation pressure as adults. Presence of countershading suggests predation pressure strong enough to select for concealment in this megaherbivore despite possession of massive dorsal and lateral armor, illustrating a significant dichotomy between Mesozoic predator-prey dynamics and those of modern terrestrial systems.

Etymology: The generic name Borealopelta is derived from “borealis” (Latin, “northern”) and “pelta” (Greek, “shield”), in reference to the northern locality and the preserved epidermal scales and dermal osteoderms. The specific epithet markmitchelli honors Mark Mitchell for his more than 7,000 hours of patient and skilled preparation of the holotype. 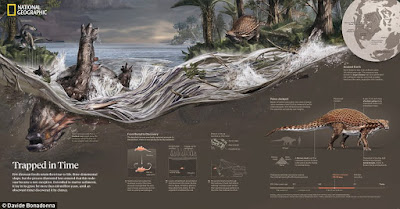 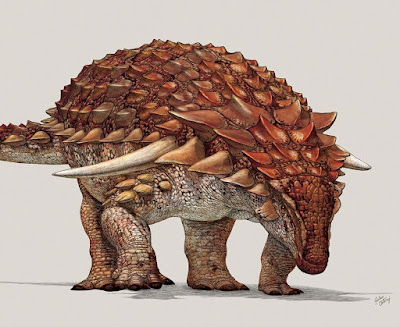 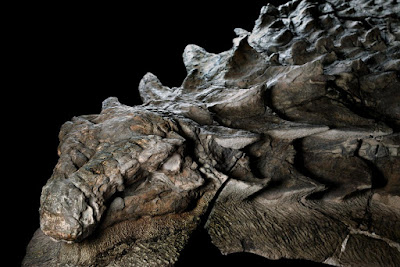 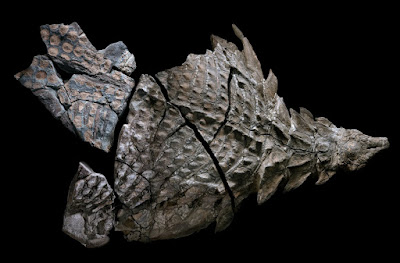 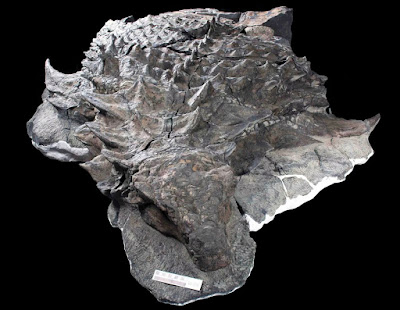 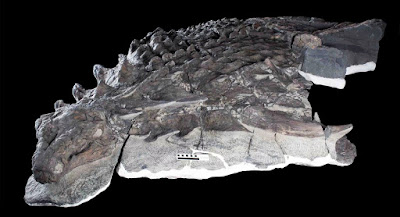 Holotype: The holotype is Royal Tyrrell Museum of Palaeontology (TMP) 2011.033.0001: an articulated specimen preserving the head, neck, most of the trunk and sacrum, a complete right and a partial left forelimb and manus, partial pes (Figure 1). In situ osteoderms and nearly complete soft tissue integument are preserved across dorsal and lateral surfaces of the axial skeleton, posterodorsal surface of forelimbs, and plantar surfaces of a manus and a pes. Specimen is preserved in multiple large blocks, including slabs and counter-slabs in the sacral region.

The new taxon can be further differentiated from Pawpawsaurus based on: dermal plate in frontonasal region (central dermal plates) flat; absence of ciliary osteoderm. Can be further differentiated from Sauropelta based on: parietals flat to slightly convex; cervical half ring has 4–6 osteoderms only; medial cervical osteoderms subequal, hexagonal, and bear prominent median ridge with posterior margin projecting beyond the basal footprint. 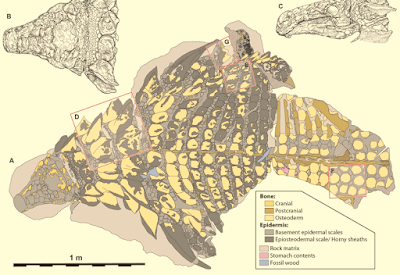 It's Official: Stunning Fossil Is a New Dinosaur Species  on.natgeo.com/2vx0wxD via @NatGeo
This Is the Best Dinosaur Fossil of Its Kind Ever Found on.natgeo.com/2r02aW7 via @NatGeo
Discover How This Dinosaur Became an Extraordinary Fossil  NationalGeographic.com/magazine/2017/06/making-of-a-dinosaur-fossil-nodosaur-illustrations 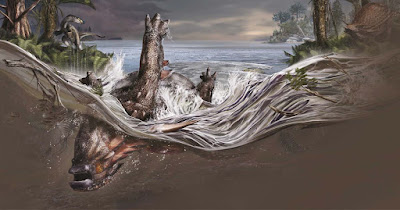 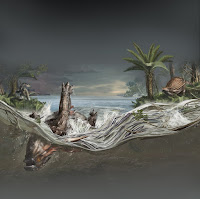 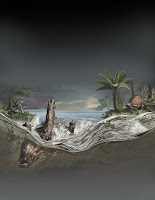