[Paleontology • 2014] Aquilops americanus • A Ceratopsian Dinosaur from the Lower Cretaceous of Western North America, and the Biogeography of Neoceratopsia

Abstract
The fossil record for neoceratopsian (horned) dinosaurs in the Lower Cretaceous of North America primarily comprises isolated teeth and postcrania of limited taxonomic resolution, hampering previous efforts to reconstruct the early evolution of this group in North America. An associated cranium and lower jaw from the Cloverly Formation (?middle–late Albian, between 104 and 109 million years old) of southern Montana is designated as the holotype for Aquilops americanus gen. et sp. nov.  Aquilops americanus is distinguished by several autapomorphies, including a strongly hooked rostral bone with a midline boss and an elongate and sharply pointed antorbital fossa. The skull in the only known specimen is comparatively small, measuring 84 mm between the tips of the rostral and jugal. The taxon is interpreted as a basal neoceratopsian closely related to Early Cretaceous Asian taxa, such as Liaoceratops and Auroraceratops. Biogeographically, A. americanus probably originated via a dispersal from Asia into North America; the exact route of this dispersal is ambiguous, although a Beringian rather than European route seems more likely in light of the absence of ceratopsians in the Early Cretaceous of Europe. Other amniote clades show similar biogeographic patterns, supporting an intercontinental migratory event between Asia and North America during the late Early Cretaceous. The temporal and geographic distribution of Upper Cretaceous neoceratopsians (leptoceratopsids and ceratopsoids) suggests at least intermittent connections between North America and Asia through the early Late Cretaceous, likely followed by an interval of isolation and finally reconnection during the latest Cretaceous.

Etymology: The genus name is derived from the Latin aquila, meaning “eagle,” and the Greek ops, meaning “face,” referring to the hooked beak on the skull of the animal. The species name, meaning “American” (Latin), reflects the species' status as the earliest unequivocal neoceratopsian in North America. 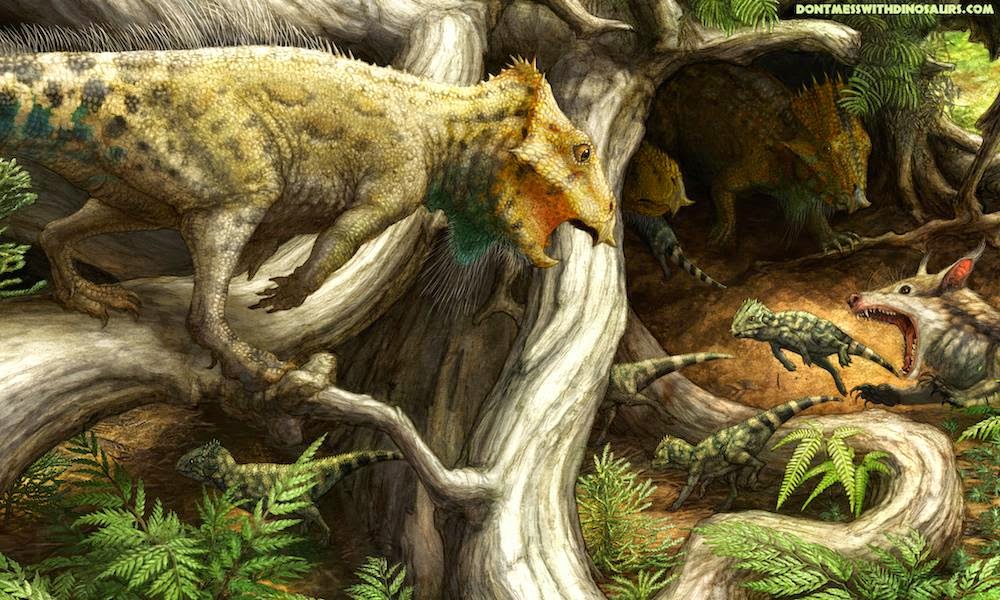 Andrew A. Farke, W. Desmond Maxwell, Richard L. Cifelli and Mathew J. Wedel. 2014. A Ceratopsian Dinosaur from the Lower Cretaceous of Western North America, and the Biogeography of Neoceratopsia. PLoS ONE. DOI: 10.1371/journal.pone.0112055

Aquilops, the little dinosaur that could http://blogs.plos.org/paleo/2014/12/10/aquilops-hello/
Introducing Aquilops americanus http://dontmesswithdinosaurs.com/?p=1220
Bunny-Sized Dinosaur Was First of Its Kind in America http://on.natgeo.com/1x3oyuG via @NatGeo