Abstract
The Indonesian island of Sumatra contains several endemic species of parachuting frog of the genus Rhacophorus. Most of these are known from small type series collected from only a few localities, and consequently, many Sumatran Rhacophorus species are poorly understood. Using mitochondrial DNA (mtDNA), we investigated relationships among a group of Rhacophorus species from southern Sumatra. Our molecular analysis was based on a fragment of the 16S ribosomal subunit gene (16S) and included data derived from type specimens of two species endemic to Sumatra: R. barisani and R. catamitus. Our analyses of these data reveal that the only known female specimen of R. catamitus possesses a divergent 16S sequence compared to male specimens (8.82%; uncorrected “p” distance). Based on phylogenetic reconstructions, we found that this female specimen belongs to an unnamed taxon related to R. margaritifer from Java. Consequently, we remove the specimen from R. catamitus and describe it as Rhacophorus bengkuluensis sp. nov., a medium-sized slender tree frog with extensive brown hand webbing. We identified additional specimens referable to the new species using mtDNA and morphology. These specimens originate from low to intermediate elevations (ca. 600–1600 m) in the provinces of Bengkulu and Lampung, suggesting that R. bengkuluensis is widely distributed across the southwestern versant of the Bukit Barisan. 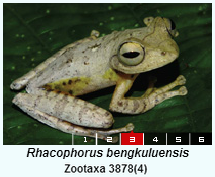