Highlights
• Serpentisuchops is a polycotylid plesiosaur, from the Cretaceous of Wyoming
• Unlike most plesiosaurs, it has both a long neck and large, elongated jaws
• The partial skeleton indicates the animal was over seven meters long
• The long jaws and neck likely aided in rapid lateral striking to snag fast, small prey
Summary
Plesiosaurs are a group of Mesozoic marine diapsids. Most derived plesiosaurs fall into one of two typical body forms: those with proportionately small heads, short snouts, and elongated necks, and those with large heads, elongated snouts, and short necks. Serpentisuchops pfisterae is a polycotylid plesiosaur from the Upper Cretaceous Pierre Shale that presents the trait combination of both an elongate snout and elongate neck (consisting of 32 vertebrae). Phylogenetic analysis places Serpentisuchops within the Polycotylinae, indicating that its long snout is an ancestral trait, while its long neck is secondarily derived and convergent with that of ancestral plesiosaurs, contemporaneous elasmosaurids, and some more basal members of the Polycotylidae. The conical, recurved, and narrow teeth are consistent with a piscivorous diet. The tall and anteroposteriorly broad cervical neural spines indicate large epaxial muscles, suggesting that Serpentisuchops used both its neck and snout in fast lateral strikes aimed at proportionately small prey.
Plesiosauria de Blainville, 1835.
Plesiosauroidea Welles, 1943.
Polycotylidae Williston, 1908.
Serpentisuchops pfisterae Persons, Street, and Kelley, 2022, gen. et sp. nov.
Holotype: Specimen GPM5001 at the Glenrock Paleon Museum in Glenrock, Wyoming, USA, a partial skull, lower jaw, and vertebral column, plus left ileum and pubis (Figure 1).
Horizon and Locality Old Woman Anticline (Gill and Cobban, 1966), upper half of the upper member of the Pierre Shale, lower Maastrichtian (Upper Cretaceous), 69.59 (±0.36) to 70.00 (±0.45) million years ago (Ogg et al., 2012).
Diagnosis: A polycotylid having 36 dentary alveoli; a mandibular symphysis dominated by the dentaries and in which each angular extends for less than 0.3% of the total symphysis length (6 mm in the holotype); a pre-dorsal vertebra series of 32 cervical vertebrae and 4 pectoral vertebrae; posterior cervical vertebrae with neural spines that broaden anteroposteriorly into expanded dorsal tips; an ilium with a sacral end that is the anteroposteriorly widest and mediolaterally thinnest part of the ilium and is neither rounded nor tapered, but forms an abrupt and anteroposteriorly straight edge; and a pubis with a posterolateral edge that extends anteriorly and curves strongly to form a posterolateral projection that is hook-shaped in dorsal and ventral view. In addition, Serpentisuchops presents a unique combination of characters: as in Polycotylus, the splenial is not visible dorsally and the left and right angulars never converge on the ventral surface of the mandible; as in Dolichorhynchops, the dorsal vertebrae have anteroposteriorly elongate centra and neural spines with anteroposteriorly long and flat distal tips; the medioposterior edge of the pubis is strongly curved, but does not end in a prominent posterior projection (as it does in Dolichorhynchops tropicensis) and does not extend as far posteriorly as the ischial articulation facet. 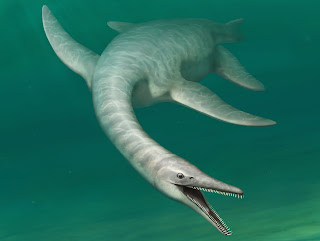 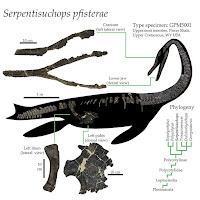 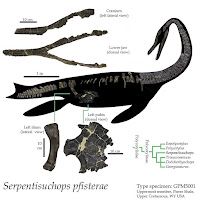