﻿Abstract
Nepenthes pudica, a new species from North Kalimantan, Indonesia, is described and illustrated. The species belongs to the N. hirsuta group (sensu Cheek and Jebb 1999) but exhibits some characters that are unique within the group or even within the genus. Above all, it produces underground, achlorophyllous shoots with well-developed, ventricose lower pitchers that form in soil cavities or directly in the soil. No lower pitchers are formed above ground. The main part of its prey are ants, besides other litter- and soil-inhabiting species of invertebrates. A number of infaunal species were found in both aerial and underground pitchers, mainly Diptera and nematodes. Nepenthes pudica is known only from a few neighbouring localities in the Mentarang Hulu district of North Kalimantan, where it grows on ridgetops at an elevation of 1100–1300 m. Its discovery underlines the natural richness of Borneo’s rainforest and the necessity to preserve this important ecosystem with its enormous and still undiscovered biodiversity.
Keywords: Borneo, carnivorous plant, Caryophyllales, Mentarang Hulu, prey composition, taxonomy, underground trap 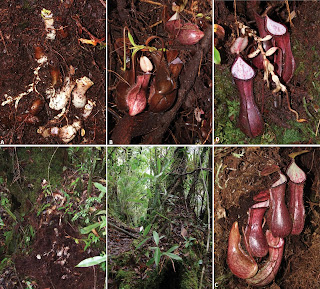