Darevskia is a particularly species-rich radiation of Palearctic rock lizards from the Caucasus region. Thanks to intense systematic and taxonomic research, the knowledge of species – level diversity within this genus has increased over the last quarter century. Here, we described a new species, Darevskia salihae sp. nov. from northeastern Turkey. The new taxon is differentiated from other nearby taxon by the low number of dorsal scales in the middle of the body, the shorter body length, and the absence of blue dots both on the lateral region above the forelimbs and on the margin of the ventral plates. In addition to their morphological differences, the new taxon is phylogenetically different from close groups. It is located in a separate subclade from the rudis-valentini-portschinskii subclade. This distinction is supported by both a high bootstrap value (100) and a high posterior probability value (1.00). These two subclades are separated from each other by a genetic distance of almost 4%. This separation is supported not only genetically and morphologically, but also geographically. Since the habitat of the new taxon is limited to a high mountain and a narrow valley, it does not provide an opportunity for a different Darevskia species to shelter because it creates geographical isolation. However, Darevskia parvula that live closest to the habitat of the new taxon live only at the habitat boundaries and do not enter areas where the new taxon is found. Therefore, it might be possible that while it was separated from the rudis-valentini-portschinskii group during the evolutionary transformation, it remained as a refuge and relict in a narrow area as a result of the collapse of the valleys and the partial uplift of the Kaçkar Mountains.
Key words: Darevskia salihae sp. nov., Caucasian rock lizards, New species, Phylogeny, Morphology, Isolation, Relict endemic, Anatolia.
Family: Lacertidae Oppel, 1811
Genus: Darevskia Arribas, 1999
Darevskia salihae sp. nov. Kurnaz, Şahin and Eroğlu, 2022
Diagnosis: Darevskia salihae sp. nov. is small sized (SVL: 51.79–58.98 mm) (Fig. 4a, b). Rostral and internasal is rarely in contact. Suboculars on both sides reach the mouth, four supralabials in anterior of suboculars. The first supratemporal plates are bigger than the others on each side of the head. All individuals have 4 supraocular plates on each side of the head. The supranasal plate is separated from anterior loreal plates above nostrils in all specimens. The postnasal plate is single on each side in all specimens. Massetericum is large and present in each side of temporal region. The row of supraciliar granules for all individuals is complete. 23–25 gularia between the third inframaxillary and collars. Generally, 6 longitudinal rows of ventral plates, and 24–30 ventral series in a longitudinal row along the belly between collar and preanal; 39–43 (mean 41) smooth dorsal midbody scales. 17–19 femoral pores exist on the right side. 22–25 lamellae exist beneath the 4th toe. The dorsal body scales in the midbody are tiny and flat. Subdigital lamellae in the 4th toe is smooth. The anal plate is singular in all specimens. Tibial scales are not carinated.
Etymology: The name of the new taxon was given in honor of Saliha Şahin, who is the mother of one of the authors, Mehmet Kürşat Şahin, who passed away recently. 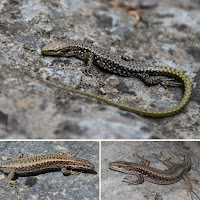