Abstract
The Australian pterosaur record is poor by world standards, comprising fewer than 20 fragmentary specimens. Herein, we describe the new genus and species Ferrodraco lentoni gen. et sp. nov., based on the most complete pterosaur specimen ever found in Australia, and the first reported from the Winton Formation (Cenomanian–lower Turonian). The presence of premaxillary and mandibular crests, and spike-shaped teeth with subcircular bases, enable Ferrodraco to be referred to Anhangueria. Ferrodraco can be distinguished from all other anhanguerian pterosaurs based on two dental characters: the first premaxillary and mandibular tooth pairs are small; and the fourth–seventh tooth pairs are smaller than the third and eighth ones. Ferrodraco was included in a phylogenetic analysis of Pterosauria and resolved as the sister taxon to Mythunga camara (upper Albian Toolebuc Formation, Australia), with that clade occupying the most derived position within Ornithocheiridae. Ornithocheirus simus (Albian Cambridge Greensand, England), Coloborhynchus clavirostris (Valanginian Hastings Sands, England), and Tropeognathus mesembrinus (upper Aptian–lower Albian Romualdo Formation, Brazil) were resolved as successive sister taxa, which suggests that ornithocheirids were cosmopolitan during the Albian–Cenomanian. Furthermore, the stratigraphic age of Ferrodraco lentoni (Cenomanian–lower Turonian) implies that anhanguerians might have survived later in Australia than elsewhere.

Etymology: From the Latin ferrum (iron), in reference to the ironstone preservation of the holotype specimen, and the Latin draco (dragon). The species name honours former Winton Shire mayor Graham Thomas ‘Butch’ Lenton, in recognition of his years of service to the Winton community and support to the Australian Age of Dinosaurs Natural History Museum. 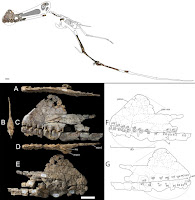