Abstract
A 2007 survey of small mammals on Mt. Mantalingahan (2,086 m elevation), southern Palawan Island, Philippines, obtained specimens of a distinctive, previously unknown shrew (Soricidae). We describe these specimens as representing a new, monotypic genus and species, Palawanosorex muscorum. The new species was common on Mt. Mantalingahan from 1,550 to 1,950 m (near the peak) but was not detected from 700 to 1,300 m elevation. The previously known native, syntopic shrew, Crocidura palawanensis, has a slender body, slender fore and hind feet, and a long, thin tail with a few long bristles. In contrast, the new species has a stout body, broad fore feet, long claws, and a short tail covered by short, dense fur but no bristles. The dental formula traditionally used would result in assignment of the new species to Suncus, but several distinctive external and cranial features are present, and phylogenetic analyses of thousands of ultraconserved elements suggest P. muscorum is sister to most other Crocidurinae, a clade represented throughout Southeast Asia but numerically dominated by African species. The new species is a distant relative of Suncus murinus (the type species of Suncus) and all other known Southeast Asian species, including the only other shrew known to occur on Palawan (Crocidura batakorum). A time-calibrated phylogenetic analysis estimates divergence between Palawanosorex and its closest known relatives at approximately 10 Ma.

Etymology.— Named for the island of Palawan in combination with Latin sorex, shrew. Gender of genus is masculine.

Etymology.— The species name was derived from muscorum, genitive of Latin musci, mosses, meaning “of the mosses,” referring to the mossy habitat of the shrew. As an English vernacular name, we propose “Palawan Moss Shrew.” 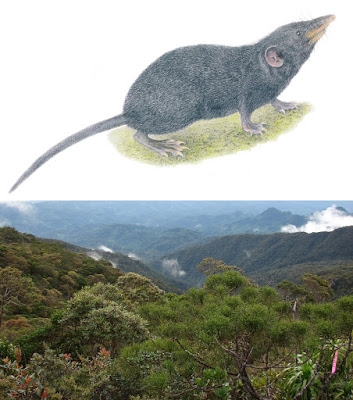 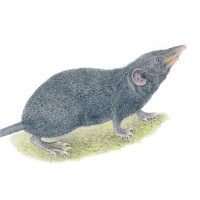