Abstract
This communication describes a new octocoral, Altumia delicata gen. n. & sp. n. (Octocorallia: Clavulariidae), from mesophotic reefs of Eilat (northern Gulf of Aqaba, Red Sea). This species lives on dead antipatharian colonies and on artificial substrates. It has been recorded from deeper than 60 m down to 140 m and is thus considered to be a lower mesophotic octocoral. It has no sclerites and features no symbiotic zooxanthellae. The new genus is compared to other known sclerite-free octocorals. Molecular phylogenetic analyses place it in a clade with members of families Clavulariidae and Acanthoaxiidae, and for now we assign it to the former, based on colony morphology. The polyphyletic family Clavulariidae is, however, in need of a thorough revision once the morphological distinctions among its phylogenetically distinct clades are better understood.

Diagnosis: Clavulariinae with a thin and soft encrusting base, sometimes resembling a short stolon. Polyps erect when expanded, separate from each other; the stolon may feature a few polyps, occasionally only one. Polyps fully retractile into base of the colony, forming low truncated dome-shaped mounds. No sclerites in any part of the colony. Colonies lack symbiotic algae (zooxanthellae). Type species: Altumia delicata sp. n. by original designation and monotypy.

Etymology: The generic name is derived from the Latin ‘altum’, deep, referring to the habitat of the new genus at MCE depths and beyond. Gender female.

Diagnosis: The ethanol-preserved holotype is comprised of thin patches of short stolon-like crusts growing over the dead branch of a black coral (Antipatharia) (Figure 2A), almost invisible to the naked eye. The milky-white, thin (<0.5 mm) crusts are a few mm long (Figure 2B), very soft, almost slime-like. Polyps completely retracted and practically invisible in the preserved colonies. No sclerites observed in any part of the colony.

Intraspecific variability: There are no differences between the holotype and the paratype except for the size of the colonies.

Etymology: The species name is formed from the Latin ‘delicata’, delicate, referring to the fine texture of the colonies and their polyps. Gender female. 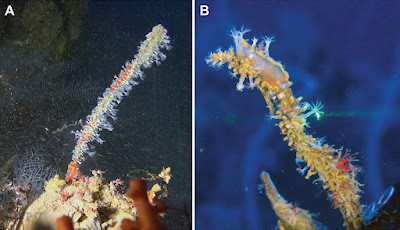