﻿Abstract
Hymenophyllum chamaecyparicola T.C.Hsu & Z.X.Chang, a new filmy fern species (Hymenophyllaceae) has been described from Taiwan and illustrated based on morphological and phylogenetic evidence. Although the new species resembles members in the subgenus Mecodium, namely H. wrightii, our plastid phylogeny has revealed that it is genetically distant from H. wrightii and forms a clade nested within subg. Hymenophyllum. The most notable characteristic to differentiate H. chamaecyparicola from related species is the presence of minute spathulate hairs on the surface of the rachis and veins. Hymenophyllum chamaecyparicola is currently only known from a small area in northern Taiwan, and endemic to that country.
Keywords: Filmy fern, Hymenophyllum, new species, Taiwan 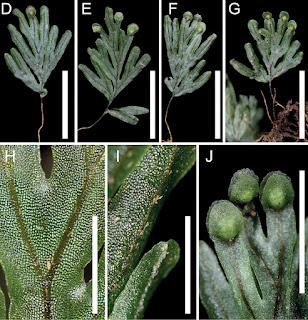 ﻿ Hymenophyllum chamaecyparicola T.C.Hsu & Z.X.Chang, sp. nov.
Diagnosis: Morphologically, Hymenophyllum chamaecyparicola is most similar to H. wrightii in sharing pinnate to bipinnatifid fronds, entire segment margins, and bivalvate, entire or subentire involucres. However, the new species could be clearly distinguished from H. wrightii by the presence of minute spathulate hairs on both surfaces of laminae (vs. glabrous laminae in H. wrightii) (Fig. 1H, I), the lack of two veinlets at the base of sori (vs. two veinlets at the base of sori in H. wrightii), and sori confined to apex or upper margins of laminae (vs. on short acroscopic segments close to rachis in H. wrightii) (Fig. 1J). This new species is phylogenetically related to H. barbatum, H. devolii, H. exsertum, H. okadae and H. oligosorum, while it could readily be distinguished from H. barbatum, H. devolii and H. okadae in having entire (vs. serrate) segment margins (Fig. 1D–G) and from H. exsertum and H. oligosorum in having pinnatifid to bipinnatifid (vs. bipinnatifid to tripinnatifid) laminae (Fig. 1D–G) sparsely covered with short (< 0.2 mm) clavate hairs (vs. densely covered with > 1 mm long acicular hairs) on abaxial surface of rachis and costae (Figs 1H, I, 2E).
Distribution and habitat: Hymenophyllum chamaecyparicola is endemic to Taiwan and currently known from scattered populations on a single ca. 2000 m2 mountain slope in Chamaecyparis montane mixed cloud forest (Li et al. 2013) around Mingchih (24.65361°N, 121.46950°E). It is epiphytic on bases of tree trunks and exposed roots of Chamaecyparis obtusa var. formosana (Hayata) Hayata.
Etymology: The specific epithet, a noun in apposition, is derived from Chamaecyparis, a Gymnosperm genus, and –cola, dweller, alluding to unusual habitat of the new species occurring on the lower trunk of the giant C. obtusa var. formosana. 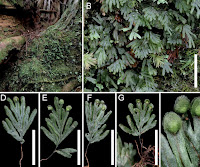 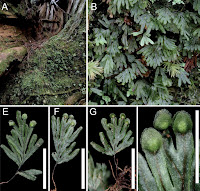