Abstract
Fossils from the Jehol Group (Early Cretaceous, Liaoning Province, China) are integral to our understanding of Paraves, the clade of dinosaurs grouping dromaeosaurids, troodontids, and avialians, including living birds. However, many taxa are represented by specimens of unclear ontogenetic age. Without a more thorough understanding of ontogeny, evolutionary relationships and significance of character states within paravian dinosaurs may be obscured and our ability to infer their biology restricted. We describe a complete specimen of a new microraptorine dromaeosaur, Wulong bohaiensis gen. et sp. nov., from the geologically young Jiufotang Formation (Aptian) that helps solve this problem. Phylogenetic analysis recovers the specimen within a monophyletic Microraptorinae. Preserved in articulation on a single slab, the type specimen is small and exhibits osteological markers of immaturity identified in other archosaurs, such as bone texture and lack of fusion. To contextualize this signal, we histologically sampled the tibia, fibula, and humerus and compared them with new samples from the closely related and osteologically mature Sinornithosaurus. Histology shows both specimens to be young and still growing at death, indicating an age for the new dinosaur of about 1 year. The holotype possesses several feather types, including filamentous feathers, pennaceous primaries, and long rectrices, establishing that their growth preceded skeletal maturity and full adult size in some dromaeosaurids. Comparison of histology in the new taxon and Sinornithosaurus indicates that macroscopic signs of maturity developed after the first year, but before cessation of growth, demonstrating that nonhistological indicators of adulthood may be misleading when applied to dromaeosaurids. 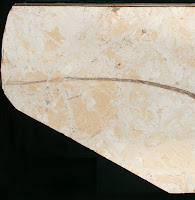 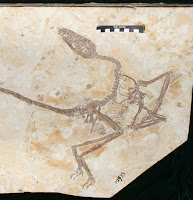 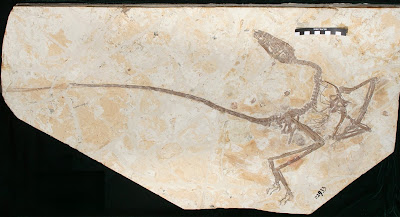 Etymology: Wulong, from the Chinese 舞 (wǔ) meaning “dancing” for the individual's sprightly pose and inferred nimble habits, and 龙 (lóng) meaning “dragon,” a suffix commonly applied to dinosaurian generic names from China, and bohaiensis, from the Chinese 渤海 (Bó Hǎi), combined with the suffix ‐ensis in honor of its accession in the collections of the Dalian Natural History Museum (DNHM) situated on the shore of the Bohai strait. -- ‘the dancing dragon from the Bohai Strait’ 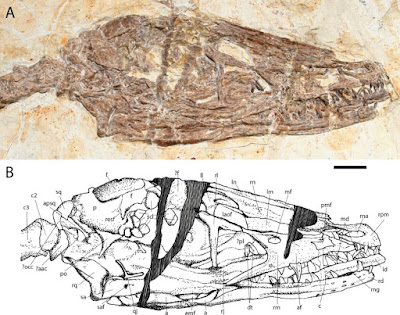 Diagnosis: A small, feathered dromaeosaurid theropod with the following autapomorphies: long jugal process of quadratojugal, cranially inclined pneumatic foramina on the cranial half of dorsal centra, transverse processes of proximal caudals significantly longer than width of centrum, presence of 30 caudal vertebrae producing a proportionally long tail, distally located and large posterior process of the ischium, and large size of supracoracoid fenestra (>15% of total area). Differs from Microraptor by having a relatively large promaxillary fenestra, no division of the maxillary fenestra, long subnarial process of premaxilla, a bifurcate caudal margin of the dentary, and possession of mesial serrations on some maxillary teeth; and from Sinornithosaurus in lack of distinctive sculpting on the maxilla, possession of pennaceous feathers, and absence of grooves in premaxillary teeth. 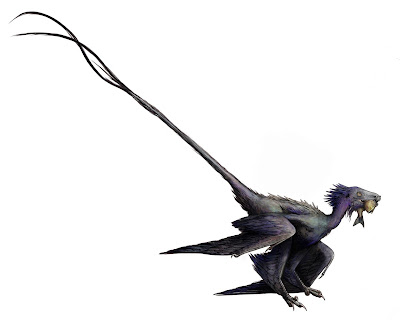 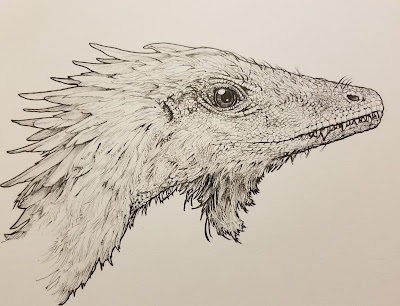 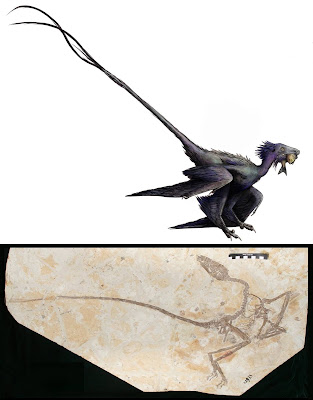 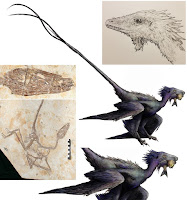 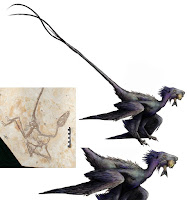