Garra surinbinnani, new species, is described from the Mae Khlong basin of western Thailand. It is the fourth species of Garra known from the basin and occurs syntopically with the other three species in fast-flowing rocky riffles. Within the Mae Khlong basin, it is most similar to G. fuliginosa from which it differs most obviously in having a bilobed (vs. trilobed) proboscis on the snout and 12-13 (vs. 15-16) circumpeduncular scales. Garra surinbinnani is readily distinguished from other species of Garra with a proboscis in Southeast Asia – G. notata and G. salweenica in the Salween basin, and G. cyrano in the Mekong basin – in having 12-13 (vs. 15-16) circumpeduncular scales, and from all species of Garra outside Southeast Asia with a bilobed proboscis and 12-13 circumpeduncular scales by having 28-31 (vs. 34 or more) lateral-line scales. 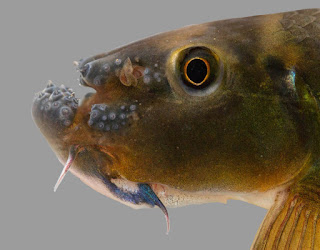 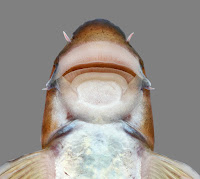 Diagnosis. Garra surinbinnani is distinguished from all other species of Garra by the combination of a more-or-less rectangular (viewed dorsally), bilobed proboscis on the snout (Fig. 2), a large transverse lobe separated from the rest of the snout by a deep transverse groove, 12-13 circumpeduncular scales, and 28-31 lateral-line scales.


Etymology. The specific name surinbinnani, a noun in genitive case, is the concatenated form of the chosen appellation of our friend and colleague, Mr. Amphol Tapanapunnitikul. Surin Binnan (สุริน บินนาน) was director of the Foundation of Western Forest Complex Conservation and a leading figure in efforts to protect natural areas in Thailand.

Distribution and habitat. Garra surinbinnani appears to be endemic to the Mae Khlong basin in western Thailand (Fig. 6). It occurs sympatrically with G. fuliginosa in fast rocky riffles in streams throughout the basin and with G. cambodgiensis and G. fluviatilis in the Khwae Noi, the large western tributary of the Mae Khlong basin. 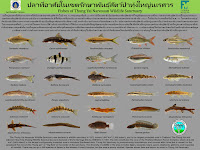