Abstract
Parotocinclus adamanteus, new species, is described from a series of specimens collected in the upper portion of the Rio Paraguaçu basin, a coastal river within the Chapada Diamantina domain, a large plateau on the State of Bahia in northeastern Brazil. The description of this new species represents the first record of a member of the Hypoptopomatinae from this relictual area. The new species is diagnosed from other Parotocinclus by having a distinct rostral border forming a fleshy intumescence on the lateral portion of head ornamented with moderately hypertrophied odontodes in adult males. It is also diagnosed from congeners by a remarkable secondary sexual dimorphism in the shape of the pelvic fin, in which the branched rays of males decrease in size, resulting in a pointed posterior fin margin (branched pelvic-fin rays in females have approximately the same size, producing a round posterior fin margin). In addition, the new species can be further distinguished from other species of Parotocinclus by lacking a rostral plate covering the tip of the mesethmoid anteriorly, by lacking abdominal plates between the pectoral girdle and the anus, by having numerous premaxillary teeth (45–61), and by having a short and mesially expanded ventral portion of the cheek canal plate. Recent phylogenetic analysis indicates that Parotocinclus adamanteus, new species, is closely related to P. jequi, P. prata, and P. robustus. 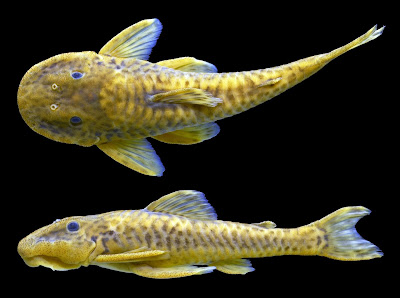 Etymology.— The specific epithet is from Latin adamas, diamond, hence adamanteus, of the diamond, in reference to the old plateau where the species occurs, the Chapada Diamantina in central Bahia State, Brazil. A noun in apposition. 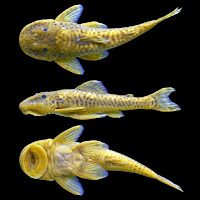 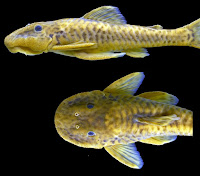