[Cnidaria • 2019] Swiftia sahlingi • New Records of Swiftia (Anthozoa, Octocorallia) from off the Pacific Costa Rican Margin, including A New Species from Methane Seeps


Abstract
Exploration of the deep sea off the Pacific margin of Costa Rica has resulted in the discovery of a number of new species and reports for the region. Here, we report on the occurrence of the octocoral genus Swiftia, and describe a new species collected by the Alvin submersible off the Pacific coast of Costa Rica. The new species has been observed at around 1000 m depth, growing on authigenic carbonates near methane seeps. Swiftia sahlingi sp. nov. is characterised by having bright red colonies that are with limited branching, with slightly raised polyp-mounds, thin coenenchyme mainly composed of long warty spindles, and conspicuous plates. A molecular phylogenetic analysis supports the differences between this new taxon and the closest Swiftia species. The new species represents the first record of the genus from Costa Rica and in fact for the Eastern Tropical Pacific. 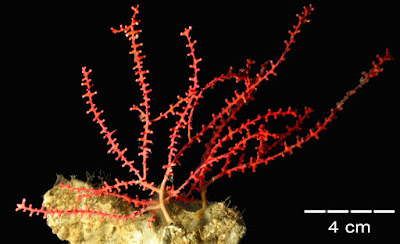 Etymology. The species is named in memory of Heiko Sahling, a distinguished marine geologist who discovered and named Mound 12, the type locality of the new species.