Abstract
We describe a new species of Pristimantis from upper montane forests and high Andean grasslands of the Pui Pui Protected Forest and its close surroundings, Región Junín, central Peru. The description of the new species is based on 34 specimens found at elevations between 3400 and 3936 m a.s.l. Pristimantis attenboroughi sp. n. is characterized by a snout–vent length of 14.6–19.2 mm in adult males (n = 21), 19.2–23.0 mm in adult females (n = 10), and is compared morphologically and genetically with other taxonomically and biogeographically relevant species of Pristimantis. The new species is characterized by having narrow digits that lack circumferential grooves, irregularly shaped, discontinuous dorsolateral folds, and absence of both tympanic membrane and tympanic annulus. The high similarity in morphology between P. attenboroughi sp. n. and members of the Andean genera Phrynopus and Bryophryne provides an example for convergent evolution, and highlights the importance of using molecular data to justify generic assignment. Pristimantis attenboroughi sp. n. is most similar to Phrynopus chaparroi from the Región Junín, suggesting that the generic placement of this species needs to be revised. Phylogenetically the new species belongs to the Pristimantis danae species Group, a clade that includes several Pristimantis species distributed in the montane forests of central Peru, including P. albertus, P. aniptopalmatus, P. ornatus, and P. stictogaster. 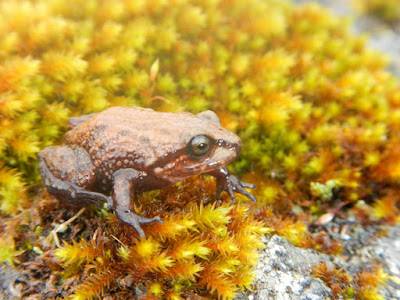 Etymology: We dedicate this species to Sir David Frederick Attenborough in honor for his educational documentaries on wildlife, especially on amphibians (e.g., Life in Cold Blood, Fabulous Frogs), and for raising awareness about the importance of wildlife conservation. The specific epithet is used as noun in apposition.