Abstract
The monotypic genus Neopalpa was described in 1998 by Czech entomologist Dalibor Povolný based on two male specimens from Santa Catalina Island, California, which he named N. neonata. The female of this species was discovered recently based on a DNA barcode match and is described. In addition, a new species with marked differences in morphology and DNA barcodes from southern California and Baja California Mexico is described as Neopalpa donaldtrumpi sp. n. Adults and genitalia of both species are illustrated, new diagnosis for the genus Neopalpa is provided, and its position within Gelechiidae is briefly discussed.


Etymology: The new species is named in honor of Donald J. Trump, to be installed as the 45th President of the United States on January 20, 2017. The reason for this choice of name is to bring wider public attention to the need to continue protecting fragile habitats in the US that still contain many undescribed species. The specific epithet is selected because of the resemblance of the scales on the frons (head) of the moth to Mr. Trump’s hairstyle. The name is a noun in the genitive case.

Distribution: So far only known from Riverside and Imperial counties in southern California and Baja California in Mexico. 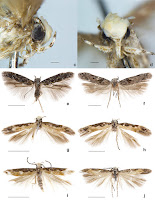