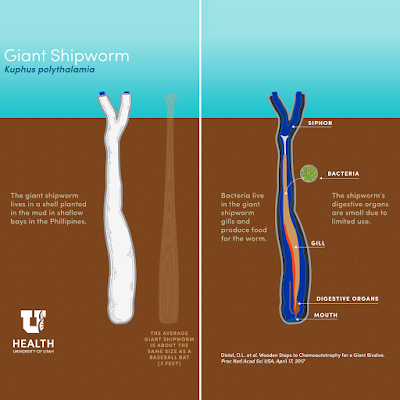 Significance
Certain marine invertebrates harbor chemosynthetic bacterial symbionts, giving them the remarkable ability to consume inorganic chemicals such as hydrogen sulfide (H2S) rather than organic matter as food. These chemosynthetic animals are found near geochemical (e.g., hydrothermal vents) or biological (e.g., decaying wood or large animal carcasses) sources of H2S on the seafloor. Although many such symbioses have been discovered, little is known about how or where they originated. Here, we demonstrate a new chemosynthetic symbiosis in the giant teredinid bivalve (shipworm) Kuphus polythalamia and show that this symbiosis arose in a wood-eating ancestor via the displacement of ancestral cellulolytic symbionts by sulfur-oxidizing invaders. Here, wood served as an evolutionary stepping stone for a dramatic transition from heterotrophy to chemoautotrophy.

Abstract
The “wooden-steps” hypothesis [Distel DL, et al. (2000) Nature 403:725–726] proposed that large chemosynthetic mussels found at deep-sea hydrothermal vents descend from much smaller species associated with sunken wood and other organic deposits, and that the endosymbionts of these progenitors made use of hydrogen sulfide from biogenic sources (e.g., decaying wood) rather than from vent fluids. Here, we show that wood has served not only as a stepping stone between habitats but also as a bridge between heterotrophic and chemoautotrophic symbiosis for the giant mud-boring bivalve Kuphus polythalamia. This rare and enigmatic species, which achieves the greatest length of any extant bivalve, is the only described member of the wood-boring bivalve family Teredinidae (shipworms) that burrows in marine sediments rather than wood. We show that K. polythalamia harbors sulfur-oxidizing chemoautotrophic (thioautotrophic) bacteria instead of the cellulolytic symbionts that allow other shipworm species to consume wood as food. The characteristics of its symbionts, its phylogenetic position within Teredinidae, the reduction of its digestive system by comparison with other family members, and the loss of morphological features associated with wood digestion indicate that K. polythalamia is a chemoautotrophic bivalve descended from wood-feeding (xylotrophic) ancestors. This is an example in which a chemoautotrophic endosymbiosis arose by displacement of an ancestral heterotrophic symbiosis and a report of pure culture of a thioautotrophic endosymbiont. 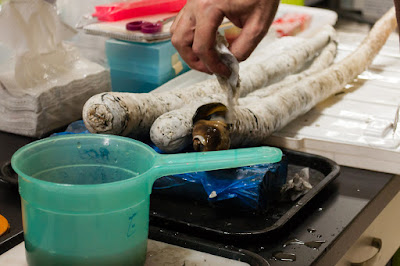 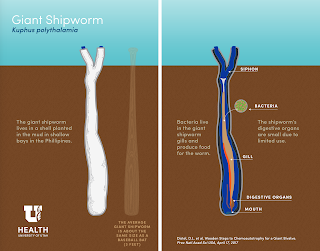 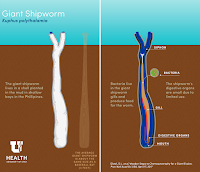