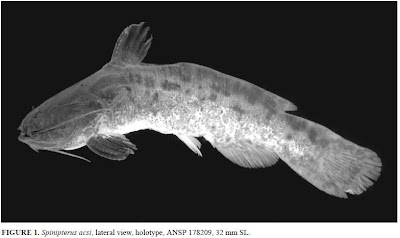 Abstract
A new species of small auchenipterid catfish is described based on a single specimen from the Amazon basin and is placed into a new genus. Spinipterus, new genus, is diagnosed by the following striking autapomorphic features: pectoral and dorsal-fin spines with four prominent rows of serrations; lateral margin of the skull roofing bones ornamented with a single row of spines; size reduction of hipurals; elongation and angle of posterior cleithral process; and adducted dorsal fin rests into a mid-dorsal groove. The new genus also differs from most other auchenipterid genera by having lower counts for some fin rays. Current diagnoses of auchenipterid genera do not allow us to place the new species into any genus, which requires us to propose the new genus Spinipterus.
Key words: Neotropical region, driftwood catfish, miniaturization, sexual dimorphism