Abstract
Bird fossils from Turonian (ca. 90 Ma) sediments of Axel Heiberg Island (High Canadian Arctic) are among the earliest North American records. The morphology of a large well-preserved humerus supports identification of a new volant, possibly diving, ornithurine species (Tingmiatornis arctica). The new bird fossils are part of a freshwater vertebrate fossil assemblage that documents a period of extreme climatic warmth without seasonal ice, with minimum mean annual temperatures of 14 °C. The extreme warmth allowed species expansion and establishment of an ecosystem more easily able to support large birds, especially in fresh water bodies such as those present in the Turonian High Arctic. Review of the high latitude distribution of Northern Hemisphere Mesozoic birds shows only ornithurine birds are known to have occupied these regions. We propose physiological differences in ornithurines such as growth rate may explain their latitudinal distribution especially as temperatures decline later in the Cretaceous. Distribution and physiology merit consideration as factors in their preferential survival of parts of one ornithurine lineage, Aves, through the K/Pg boundary.

Etymology: The genus name is from “Tingmiat”, which in Inuktitut references “those that fly”. The species name makes reference to the high Arctic provenance of the holotype and referred material. 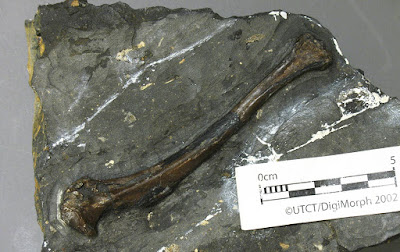 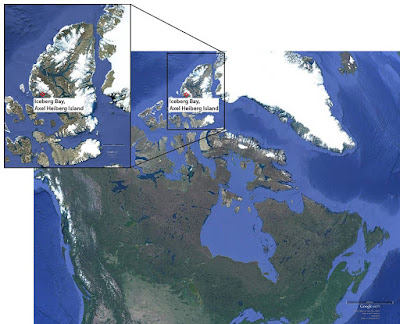 Locality and horizon: Units exposed at the fossil locality, located on Expedition Fiord (79° 23.5′N, 92° 10.9′W), Axel Heiberg Island, Nunavut, Canada (Fig. 1), vary in lithology from siltstone at the top of the section to shale near the base. These units, containing the new avialan remains as part of a rich fossil vertebrate assemblage, occur in a thinly deposited (~3 m) layer directly underlying Kanguk shale and overlying the subaerially-erupted Strand Fiord Formation flood basalts. The fossil beds are exposed on opposing sides of a river-cut and extend for approximately 50 m. Radiometric data and stratigraphic constraints suggest an age of ~92 Ma (Turonian) for the fossil assemblage, which includes champsosaurs, freshwater fish, turtles, and elasmosaurs. Depositional characteristics suggest a large bay, whereas the presence of freshwater fish, turtles, and champsosaurs indicates a freshwater to brackish environment4. The paleolatitude for the locality during deposition of the fossil-bearing strata, based on paleomagnetic analyses of the Strand Fiord basalts, is ~71° N37.

Diagnosis: The new taxon is differentiated from Ichthyornis by numerous features including the more globose humeral head with significant caudal extent, a narrow deltopectoral crest and more strongly developed secondary pneumotricipital fossa. The bicipital crest in the new taxon is also more elongate, convex distally, and transitions smoothly into the humeral shaft distally, rather than at an angle approaching 90 degrees. The new taxon possesses a narrower, slightly cranially deflected deltopectoral crest that is significantly less than shaft diameter in dorsal extent. It is differentiated from the proposed hesperornithiform Pasquiaornis tankei [RSM (Royal Saskatchewan Museum, Regina, Saskatchewan, Canada) P2487.4] in its larger size as well as proportions of the humerus (Supplementary Table S2, measurements from ref. 27). The new taxon is also differentiated from Pasquiaornis in the relatively more globose dorsal condyle, the weakly-projected olecranon process and smaller bicipital tubercle on the ulna. It should be noted that all elements from Pasquiaornis tankei and Pasquiaornis hardiei are isolated and that forelimb elements did not comprise holotype material in either species27. However, they are similar to the new taxon in the narrow, elongate and slightly cranially-deflected deltopectoral crest.