Vespertilio oreias (generally known as Myotis oreias) has long been considered an endemic bat species to Singapore but its taxonomic status has been in doubt, and no specimens have been found since its description in 1840. Temminck formally described it based on a mounted skin (now in poor condition and accompanied by some skull fragments). The holotype was re-examined and we found it to be a composite, consisting of two separate individuals representing two distinct genera, the skin belonging to a Kerivoula whereas the skull fragments are of a Myotis. The mounted skin is accepted herewith as the name-bearing type, as the skull fragments were taken out after Temminck had published his description. Unfortunately, neither the skin nor the dental remains show enough anatomical details to identify the species unambiguously. Hence, the name Vespertilio oreias is considered a nomen dubium and the name oreias should be referred to the genus Kerivoula. 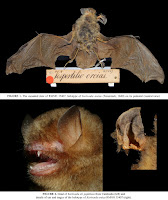