Three undescribed stingrays were discovered as part of a broader revision of the family Dasyatidae that formed part of the Chondrichthyan Tree of Life project. This research forms part of a sequence of papers on rays aimed at describing unnamed species for inclusion in a multi-authored guide to rays of the world. The first part of this series focused on a redefinition of genera of the family Dasyatidae. The new Indo–West Pacific taxa are represented by separate genera from three dasyatid subfamilies: Himantura australis sp. nov. (northern Australia and Papua New Guinea), Taeniura lessoni sp. nov. (Melanesia) and Telatrygon biasa sp. nov. (Indo–Malay Archipelago).

Himantura australis sp. nov., which belongs to a complex of four closely related reticulate whiprays, differs subtly from its congeners in coloration, morphometrics and distribution. Taeniura lessoni sp. nov. is the second species in a genus containing the widely-distributed T. lymma, which is possibly the most abundant stingray in shallow coral-reef habitats of the Indo–Pacific, with the new species apparently restricted to Melanesia. Taeniura lessoni sp. nov. is distinguishable by the absence of a distinctive pair of vivid blue longitudinal stripes on the dorsolateral edges of the tail which is one of the most distinctive features of T. lymma. Telatrygon biasa sp. nov. belongs to a small, recently designated genus of stingrays represented by four species in the tropical Indo-West Pacific. Telatrygon biasa sp. nov. differs from these species in morphometrics. The new species differs markedly from T. zugei in its NADH2 sequence. Telatrygon crozieri is resurrected as a valid northern Indian Ocean representative of the T. zugei complex. 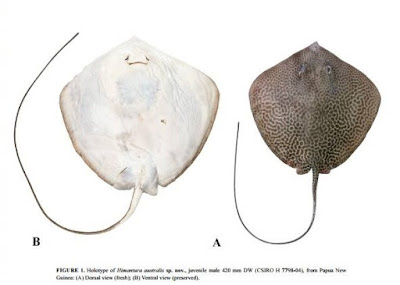 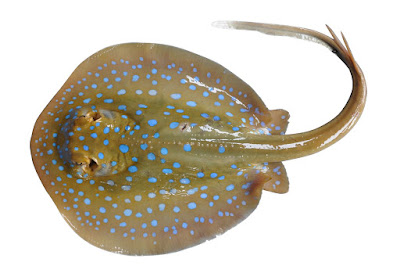 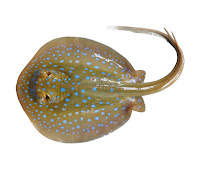