A new species of numbfish, Narcine baliensis, sp. nov., is described from the tropical eastern Indian Ocean from Indonesia. It is superficially similar to N. brevilabiata and N. atzi in aspects of its color pattern, but is distinguished from both congeners in details of its color pattern, in tooth band morphology, and in proportions of its dorsal fins, among other features. Narcine baliensis, sp. nov., is unique in having a dorsal color pattern composed of large, circular, ovoid or elongate dark brown spots or blotches on dorsal disc along with more numerous small (about eye-sized or slightly greater) brownish, subcircular spots, with large blotches and small spots surrounded by a very slender creamy-white pattern, as well as in having broadly circular upper and lower tooth bands of about the same width and shape. The genus Narcine is now composed of 20 valid species, but uncertainty remains concerning the identification and morphological variation of some of its species in the tropical Indo-West Pacific region. 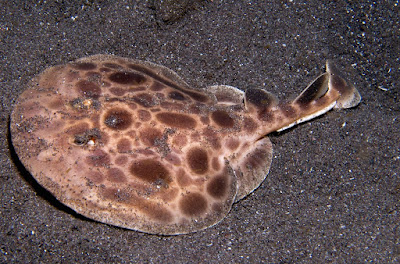 Geographical distribution.— Known from four specimens from southern Indonesia. The holotype was collected during the JETINDOFISH Survey (Gloerfelt-Tarp & Kailola, 1984) from between the islands of Bali and Lombok in depths of about 60 m. The paratypes were collected from the Cilacap fishing port in Central Java from bycatch landings of the local trammel net fishery, which operates off southern Java where it is based. The image of the live specimen was taken farther east on the other side of Wallace's line from the island of Komodo.Narcine baliensis probably occurs at least off most of Java and the western Lesser Sunda Islands, therefore crossing Wallace's line between Bali and Lombok. As far as presently known, N. baliensis and the Australian species of Narcine (= Narcinops Whitley, 1940; Carvalho et al., unpubl.) are the only numbfishes to occur east of the line.

Etymology.— Named in reference to the nearby island of Bali, close to the type locality between the islands of Bali and Lombok, Indonesia.