Abstract
South Asian Cnemaspis are one of the most diverse clades of gekkonids in South Asia with their highest diversity in the Western Ghats and Sri Lanka. These geckos include only a few nocturnal species and are largely diurnal or cathemeral and restricted to relatively cool habitats. One of the prominently diurnal subgroups in South Asian Cnemaspis is the bangara clade, which includes six species distributed in southern India on the eastern slopes of the Western Ghats, the southern Eastern Ghats and Palghat Gap. In this paper, we describe five more species of the bangara clade from the Shevaroyan landscape, including three from Kollimalai and one each from Yercaud and Pachaimalai, all in Tamil Nadu. These new species show 4.6–19.7 % uncorrected sequence divergence on the mitochondrial ND2 gene from each other and known species of the bangara clade and are morphologically diagnosable in body size, the number of paravertebral tubercles between limb insertions, the number of dorsal tubercle rows, the number of ventral scale rows across the belly, the number of femoral and precloacal pores and poreless scales separating these series, and aspects of colouration. The discovery of these five new species adds to the growing discoveries of cool-adapted species in southern India outside the Western Ghats and highlights the role of sky-islands in diversification. The Shevaroyan landscape shows high levels of microendemism with eight species distributed in an area of < 2000 km2, and all these species restricted to much smaller areas of actual distribution. With an area of < 500 km2 respectively, the massif of Pachaimalai has a single endemic and the massifs of Yercaud and Kollimalai have three endemic Cnemaspis species each. 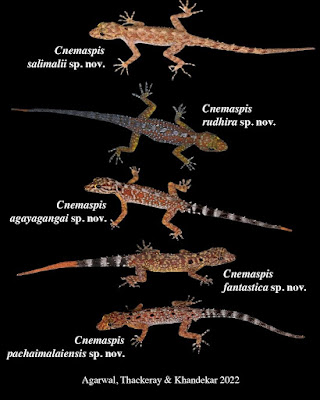 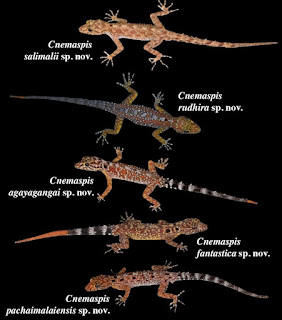 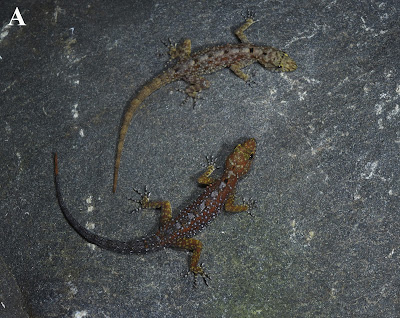 Cnemaspis rudhira sp. nov.
Etymology: The specific epithet is from the Sanskrit rudhira which means blood, alluding to the blood-red colouration of this beautiful species, and is used as a noun in apposition.
Suggested Common Name: Scarlet dwarf gecko. 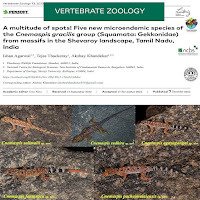 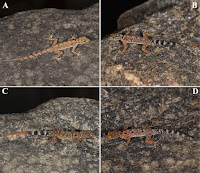 Abstract
Late Pliocene and Early Pleistocene epochs 3.6 to 0.8 million years ago had climates resembling those forecasted under future warming. Palaeoclimatic records show strong polar amplification with mean annual temperatures of 11–19 °C above contemporary values. The biological communities inhabiting the Arctic during this time remain poorly known because fossils are rare5. Here we report an ancient environmental DNA6 (eDNA) record describing the rich plant and animal assemblages of the Kap København Formation in North Greenland, dated to around two million years ago. The record shows an open boreal forest ecosystem with mixed vegetation of poplar, birch and thuja trees, as well as a variety of Arctic and boreal shrubs and herbs, many of which had not previously been detected at the site from macrofossil and pollen records. The DNA record confirms the presence of hare and mitochondrial DNA from animals including mastodons, reindeer, rodents and geese, all ancestral to their present-day and late Pleistocene relatives. The presence of marine species including horseshoe crab and green algae support a warmer climate than today. The reconstructed ecosystem has no modern analogue. The survival of such ancient eDNA probably relates to its binding to mineral surfaces. Our findings open new areas of genetic research, demonstrating that it is possible to track the ecology and evolution of biological communities from two million years ago using ancient eDNA. 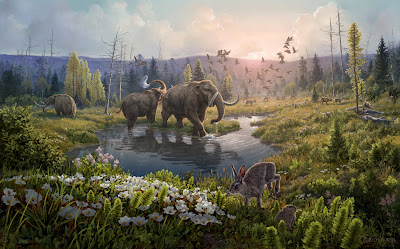 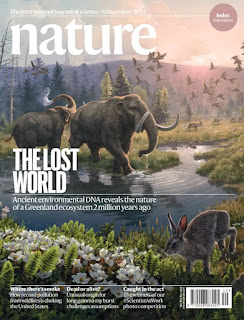 The lost world: The cover shows an artist’s impression of the rich ecosystem that existed in parts of northern Greenland some 2 million years ago. The ecosystem is reconstructed from ancient DNA in this week’s issue by Eske Willerslev and colleagues. Working at the Kap København Formation in Peary Land, the researchers gathered sediment samples rich in organic material from 5 different geological sites. By extracting and sequencing DNA from these samples, they were able to piece together a picture of the flora and fauna present around 2 million years ago. The team found evidence of open boreal forest mixed with Arctic species such as cedar, spruce and birch, as well as signs of animals including hares, mastodons, reindeer and geese. The evidence affirms that this part of Greenland, now a polar desert, was 11–17 °C warmer than it is today and suggests it was home to an ecosystem composition that no longer exists anywhere in the world.
— Cover image: Beth Zaiken/bethzaiken.com twitter.com/BZaiken
เขียนโดย pskhun ที่ 12:13 AM

Abstract
Ankylosaurid dinosaurs were heavily armoured herbivores with tails modified into club-like weapons. These tail clubs have widely been considered defensive adaptations wielded against predatory theropod dinosaurs. Here we argue instead that ankylosaurid tail clubs were sexually selected structures used primarily for intraspecific combat. We found pathological osteoderms (armour plates) in the holotype specimen of Zuul crurivastator, which are localized to the flanks in the hip region rather than distributed randomly across the body, consistent with injuries inflicted by lateral tail-swinging and ritualized combat. We failed to find convincing evidence for predation as a key selective pressure in the evolution of the tail club. High variation in tail club size through time, and delayed ontogenetic growth of the tail club further support the sexual selection hypothesis. There is little doubt that the tail club could have been used in defence when needed, but our results suggest that sexual selection drove the evolution of this impressive weapon. This changes the prevailing view of ankylosaurs, suggesting they were behaviorally complex animals that likely engaged in ritualized combat for social dominance as in other ornithischian dinosaurs and mammals.
Keywords: Dinosauria, Ankylosauria, sexual selection, animal weaponry 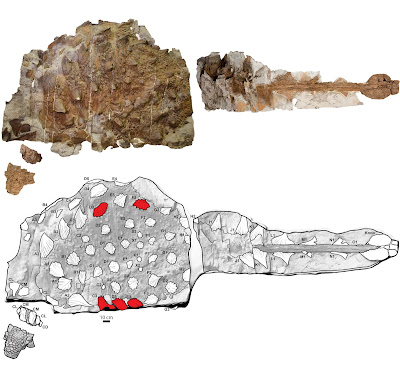 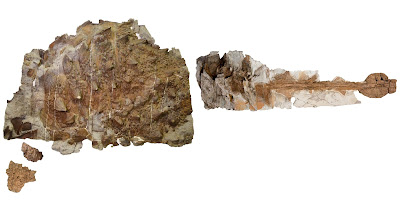 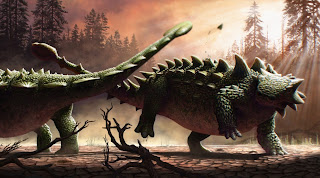 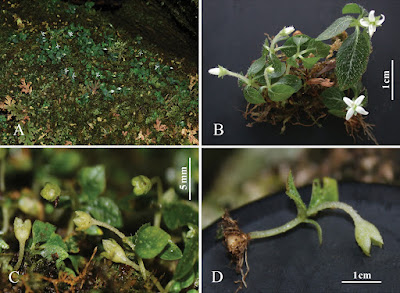 Distribution: Argostemma ehuangzhangense is endemic to E’huangzhang Nature Reserve, southwestern Guangdong Province. It is currently known only from two populations recorded in county of Dianbai and city of Yangchun.
Habitat: Growing along river on wet sandstone under the evergreen broad-leaf forest at 400–750 m a.s.l.
Etymology: The specific epithet ‘ehuangzhangense’ is derived from the type locality, E’huangzhang Nature Reserve of the Guangdong Province, in China. This area is the oldest geological platform in the Guangdong Province, in which many endemic species occur (Wang et al. 2003; 2004; Ding et al. 2018). The new species is also expected to occur in the Yunkaishan National Nature Reserve, Maoming City, because this area shares a similar tectonic history with E’huangzhang. Therefore, we proposed for the vernacular name of the species as yuèxīxuěhuā (粤西雪花).
Zhong-Cheng Liu, Jia Liu, Wan-Yi Zhao, Qiang Fan, Hua-Gu Ye, Lei Wang and Wen-Bo Liao. 2022. ﻿Argostemma ehuangzhangense (Rubiaceae), A New Species from Guangdong, China. PhytoKeys. 214: 75-82. DOI: 10.3897/phytokeys.214.89276 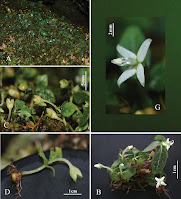 Abstract
A new species of Schoenorchis, belonging to the family Orchidaceae is described from tropical mixed evergreen forests of Mishmi Hills, (Arunachal Pradesh, India). It is allied to Schoenorchis micrantha and S. brevirachis but differs in the size and shape of plant, the size of the leaf blade, inflorescence and flower. A detailed description with taxonomic notes, colour photos and information on the habitat, conservation status are provided.
Keywords: Monocots, Schoenorchis micrantha, plant taxonomy, Flora of India, Orchids Germplasm 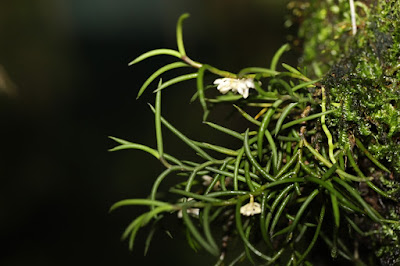 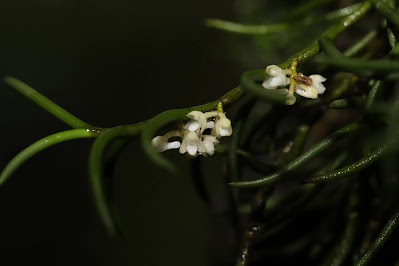 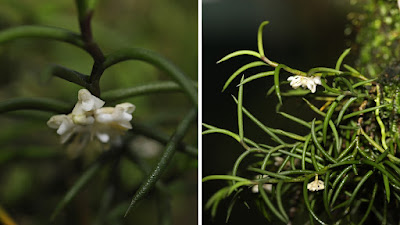 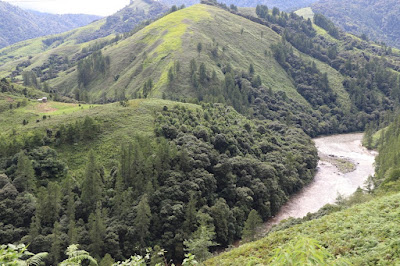 A colourful new species of Calvisia Stål, 1875, Calvisia (Calvisia) khlongsokana sp. nov., is described from Southwest Thailand and South Myanmar based on both sexes, nymphs and eggs. The new species is placed in the subgenus C. (Calvisia) Stål, 1875 and compared to the closely related species C. (Calvisia) sangarius (Westwood, 1859). The female of C. (Calvisia) sangarius (Westwood, 1859) and both sexes and egg of C. (Calvisia) khlongsokana sp. nov. are illustrated and a distribution map for both species is provided. Females of the new species occur in two distinct colour forms presumed to be aposematic. Several hypotheses are provided for the natural occurrence of these two morphs with frequency-dependant selection as a possible driver.
Keywords: Stick insect, Phasmatodea, aposematism, sexual dichromatism, sex-limited polymorphism. 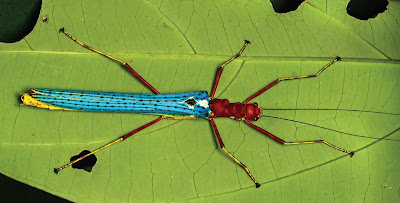 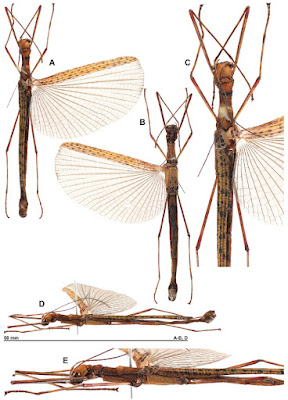 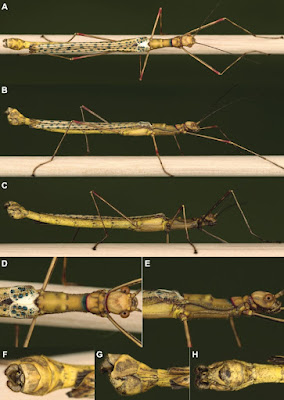 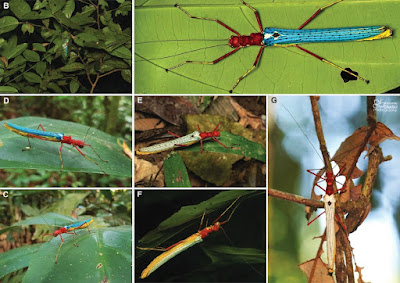 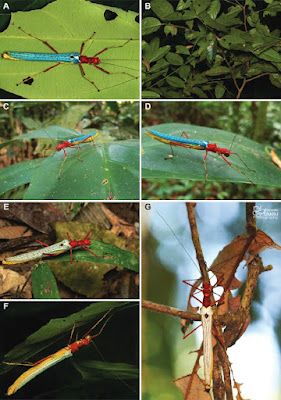 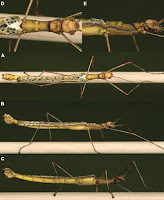 ﻿Abstract
Impatiens chenmoui (Balsaminaceae), a new species from southern Yunnan, China, was described and illustrated based on morphological and molecular evidence. This new species is morphologically most similar to Impatiens oblongata Ruchis. & Niet, but can be distinguished by 7–9 pairs of leaf veins, glabrous perianth, obovate upper petal, and capsule with trichome.
Keywords: China, Impatiens chenmoui, morphology, phylogeny, sect. Uniflorae 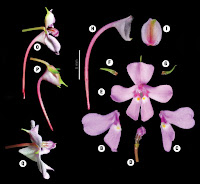 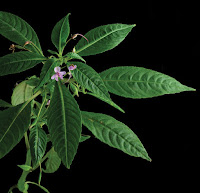 ﻿ Impatiens chenmoui Zheng W. Wang, Xiao C. Li & Q.Wang ter, sp. nov.
Diagnosis: Impatiens chenmoui is most similar to I. oblongata Ruchis. & Niet, but is distinguished by the glabrous dorsal petal, pedicel, and bracts, longer pedicel and spur, and fewer lateral sepals
Distribution and ecology: This new species was found under evergreen broad-leaved forest at an elevation of 1500–1700 m on the limestone mountain ridge, and was currently known as only one population in Mengla County, Yunnan, China. This distribution area is very close to the border with Myanmar and Laos. We assume that this species should be also distributed in Myanmar and Laos due to their similar habitat.
Etymology: The specific epithet “Chenmoui” was dedicated to the famous Chinese collector and botanist, Chen Mou (陈谋) (1903–1935) who was one of the founders of the first botanical garden cataloged by the Classification System of Plants in China, and died during the collection trip through southern Yunnan, China. The Chinese name was given as “陈谋凤仙花”.
Zheng-wei Wang, Qi Wang, Ru-hua Xu, Yu Zhang and Xiao-chen Li. 2022. ﻿Impatiens chenmoui (Balsaminaceae), A New Species from southern Yunnan, China. PhytoKeys. 214: 83-95. DOI:  10.3897/phytokeys.214.94898
เขียนโดย pskhun ที่ 2:56 PM

Summary
Phyllarthron is a genus of large trees and shrubs with 18 currently recognised Malagasy species and one further species restricted to the Comoro Archipelago (P. comorense DC.). Most of the species occur in sub-humid and humid parts of Madagascar, with only five currently recognised species in dry and semi-arid zones. The species newly described here occurs in dry shrubby vegetation on white sand. The number, shape and relative proportions of the leaf articles, and the presence of pubescence on the leaves, fruit, flower and the young shoots immediately distinguishes this species from others in the genus.
Key Words: Bongolava Forest Corridor, dry and semi-arid zones, white sand
Phyllarthron arenicola Rakotoaris. & Rabarij. sp. nov.
RECOGNITION. Phyllarthron arenicola differs from P. bernierianum in its shorter phyllodes (2 – 6 cm vs 3 – 12.5 cm) which are pubescent on both surfaces rather than glabrous, and the corolla which is distinctly pubescent both externally and internally, rather than minutely scabrid-velutinous.
ETYMOLOGY. Arenicola or sand-dweller, named after the white sand substrate in which the species occurs.
VERNACULAR NAME. Tohiravina (Tsimihety).
Solofo E. Rakotoarisoa, Romer N. Rabarijaona and David J. Goyder. 2022. A New Dry Forest Species, Phyllarthron arenicola (Bignoniaceae: Coleeae), from North-Western Madagascar. Kew Bulletin. DOI: 10.1007/s12225-022-10067-8
ResearchGate.net/publication/365931540_A_new_dry_forest_species_Phyllarthron_arenicola_from_North-Western_Madagascar
เขียนโดย pskhun ที่ 10:09 PM