Abstract
We describe Genaemirum phagocossorum Rousse, Broad & van Noort, sp. n., a new ichneumonine parasitoid wasp reared from Eucalyptus nitens logs infested by the cossid moth Coryphodema tristis, which is considered a major pest of forestry and food crops in South Africa. This is the first plausible host association for the genus, and fits with the host association predictions of Heinrich. Two further undescribed species were found in the collections of the Natural History Museum in London and are described as Genaemirum phacochoerus Broad, Rousse & van Noort, sp. n. and Genaemirum fumosum Broad, Rousse & van Noort, sp. n. An identification key to the eight known species and a diagnosis for each species are provided, including photographs of all the primary type specimens. Online Lucid interactive identification keys are available at: http://www.waspweb.org.

Etymology: From the latin “cossus” for “worm or grub found in wood”, which is the likely host (Cossidae), and “phago” = latin for “a glutton”. Noun in the genitive case. 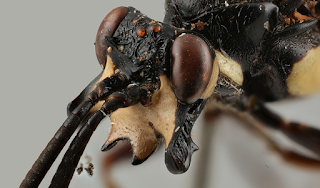 Etymology: The name is derived from the genus name for warthogs, after the resemblance of the head to that of a warthog. Noun in apposition.

Etymology: The name is derived from the Latin for "smoky", in reference to the infuscate wings. Noun in apposition.