Abstract
Mushrooms belonging to the genus Amanita were collected during a fungal biodiversity study in northern Thailand in 2012–2014. Morphological characteristics and molecular phylogenetic analyses were used to identify the mushrooms to species. Amanita castanea is described as new to science and compared with phenetically and phylogenetically similar species. It is assignable to Amanita stirps Citrina within Amanita series Mappae. Four other species, A. concentrica, A. rimosa, A. cf. rubromarginata and A. zangii are first reports for Thailand; detailed morphological and molecular data are provided for the Thai material. 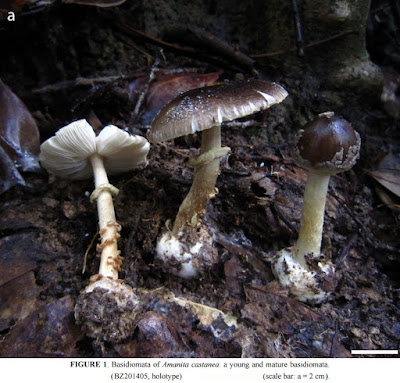 Habitat: scattered on the ground in forest of Fagaceae.

Discussion
In the present study, we document a novel species and four first records of Amanita species in northern Thailand. Species circumscriptions and identification are supported by both phylogenic and morphological evidence. One interesting exception might be Amanita cf. rubromarginata. The characteristics of the Thai collections, especially the colors of the pileus, agree well with the type description. However, additional collections made in southwestern Japan indicate that the colors of aging A. rubromarginata might be more different from the Thai collections than originally thought. According to illustrations in the recent book of SE Japanese fungi (Terashima et al. 2016), the center of the cap can be nearly black and the margin, olive. These colors were never observed in the Thai material. Therefore, more collections should be made from Thailand to assess the color variation.