Abstract
Among the endemic biota of Madagascar, skinks are a diverse radiation of lizards that exhibit a striking ecomorphological variation, and could provide an interesting system to study body-form evolution in squamate reptiles. We provide a new phylogenetic hypothesis for Malagasy skinks of the subfamily Scincinae based on an extended molecular dataset comprising 8060 bp from three mitochondrial and nine nuclear loci. Our analysis also maximizes taxon sampling of the genus Amphiglossus by including 16 out of 25 nominal species. Additionally, we examined whether the molecular phylogenetic patterns coincide with morphological differentiation in the species currently assigned to this genus. Various methods of inference recover a mostly strongly supported phylogeny with three main clades of Amphiglossus. However, relationships among these three clades and the limb-reduced genera Grandidierina, Voeltzkowia and Pygomeles remain uncertain, mainly based on maximum likelihood and maximum parsimony estimates. Supported by a variety of morphological differences (predominantly related to the degree of body elongation), but considering the remaining phylogenetic uncertainty, we propose a redefinition of Amphiglossus into three different genera (Amphiglossus sensu stricto, Flexiseps new genus, and Brachyseps new genus) to remove the non-monophyly of Amphiglossus sensu lato and to facilitate future studies on this fascinating group of lizards. 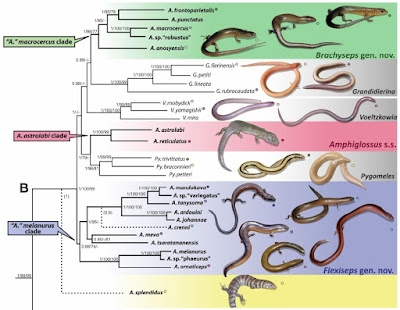