Monopterus luticolus, new species, is described from Cameroon. Most of the seven known individuals were discovered in inundated soil while digging for caecilian amphibians. Monopterus luticolus differs from the two other nominal African synbranchid species in the number of vertebrae and details of its osteology. The spatial dissociation of ceratobranchial 1 from hypobranchial 1 and its close association with hypobranchial 2 and ceratobranchial 2 demonstrate that M. luticolus is a member of the ‘Amphipnous group’.


Etymology. The species name is derived from the Latin word for mud, lutus, and the verb colere, to dwell, referring to the habitat in which the new species was collected. A noun in apposition.

Distribution. Monopterus luticolus is known only from four localities in the proximity of Mount Cameroon at altitudes of 35-170 m above sea level (Fig. 5). 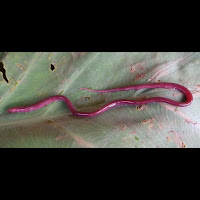 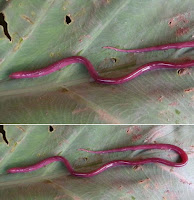