The girdled lizard genus Cordylus is represented in Angola by two species, Cordylus angolensis and C. machadoi, separated from their nearest congeners by over 700 km. Here we describe a new species, Cordylus namakuiyus sp. nov., endemic to the arid lowlands west of the southern Angolan escarpment. Phylogenetic analysis using three mitochondrial and eight nuclear genes shows that the low-elevation forms and the proximate, high-elevation species C. machadoi are genetically divergent and reciprocally monophyletic, and together form the earliest diverging lineage of the northern Cordylus clade. Morphological data, collected using computed tomography and traditional techniques (scalation and morphology), identify consistent phenotypic differences between these high- and low-elevation species and allows for a detailed description of the osteology and osteodermal arrangements of the new species. A series of 50 specimens, collected during the 1925 Vernay expedition to southwestern Angola and housed at the American Museum of Natural History, are assigned to the new species, although the identity of Cordylus from northern Namibia remains ambiguous and requires further investigation. 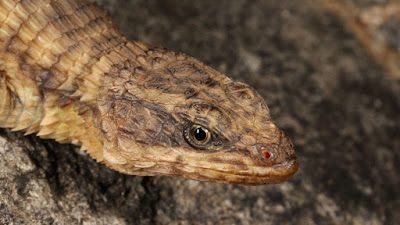 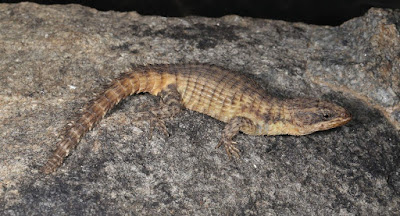 Etymology. The specific epithet “namakuiyus” is the masculine latinised form of namakuiya, which means “thorny” in the Herero language, referring to the sharp spines on the limbs and tail of this species. Suggested common name: Kaokoveld Girdled Lizard.

Distribution. Currently, the new species is known only from the south and central parts of Namibe Province, Angola, southwest of the Leba escarpment, at elevations of 215–509 m a.s.l.


Habitat and natural history notes. This species is found in gently sloping crevices of granite outcrops in the arid Kaokoveld. When approached, specimens retreat into their fissure as far as possible, wedging themselves head-first and protecting their head and flanks with their spiny tails. As with all other cordylines, Cordylus namakuiyus sp. nov. is viviparous; the holotype contained two large fetuses (SVL 49.5% of the holotype). The fetuses appear to be approaching full-term, suggesting a spring/early summer parturition period. Although these fetuses lack any body osteoderms, the slightly larger neonates (SVL 55.6–56.4% of the holotype) possess significant dermal ossification, suggesting that the young rapidly accumulate osteodermal armour following parturition. One of the Pico Azevedo specimens was found occupying the same rock crack as an adult Chondrodactylus pulitzerae (Schmidt), and PEM R18005 from Iona National Park inhabited the same crack as an adult Chondrodactylus fitzsimonsi (Loveridge). 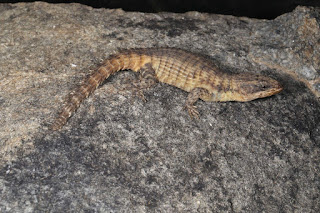