ABSTRACT
Recent collections from Sulawesi allow an investigation of Amomum subgenus Botryamomum K. Schum. and its three species, Amomum chrysogynia K. Schum., A. echinosphaera K. Schum., and A. melichroum K. Schum. It is concluded that this subgenus contains a single species, Amomum melichroum K. Schum. Amomum subgenus Botryamomum and Amomum melichroum are lectotypified and Schumann's classification of them as Alpinia melichroa (K. Schum.) K. Schum. in Alpinia sect. Botryamomum (K. Schum.) K. Schum. is accepted. An amplified description including flowers and fruits is provided. Alpinia melichroa is narrowly distributed in southeastern Sulawesi; a conservation assessment is given. Sulawesi is the world's eleventh largest island with a land area greater than 180 000 km 2 . It lies in Wallacea which is the biogeographical region between Borneo and New Guinea, bounded by Wallace's line to the west and Lydekker's line to the east. Botanical exploration of Sulawesi is very far from com-plete. At the beginning of the 'Flora Malesiana' project, van Steenis (1950) estimated that only 18 herbarium specimens per 100 km 2 had been collected, a far lower number than in Peninsular Malaysia, Java, the Philippines and the Moluccas. Botanical collecting has been limited for most of the 60 years since van Steenis made his calculation and it is unlikely that the collecting density index is much higher today. This general lack of collecting effort is compounded in Zingiberaceae by other historical factors. The first significant collections from Sulawesi are those of Beccari, who visited the island in 1872–1874, leaving many valuable collections at FI. In the 1880s, Warburg made numerous collections in Sulawesi and was followed by the Sarasin cousins who made two long expeditions to Sulawesi in 1893–1896 and 1902–1903. At this period, K. M. Schumann was working on a revision of the Zingiberaceae for Engler's 'Das Pflanzenreich' (1904). Schumann worked at the Botanical Museum Berlin-Dahlem, where fire bombing in 1943 destroyed the wing of the herbarium which housed the monocotyledons. It seems that most of Warburg's and all of the Sarasins' collections were destroyed in this fire because stringent efforts by a number of experts in Zingiberaceae have located almost no surviving material. 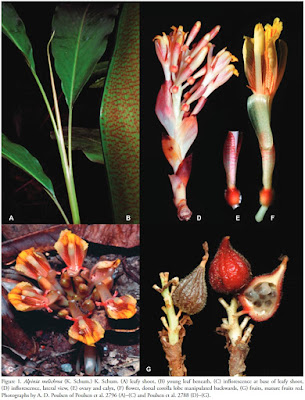