Abstract
Reptiles have a long history of transitioning from terrestrial to semi-aquatic or aquatic environments that stretches back at least 250 million years. Within Archosauria, both living crocodylians and birds have semi-aquatic members. Closer to the root of Archosauria and within the closest relatives of the clade, there is a growing body of evidence that early members of those clades had a semi-aquatic lifestyle. However, the morphological adaptations to a semi-aquatic environment remain equivocal in most cases. Here, we introduce a new Middle Triassic (245–235 Ma) archosauriform, Litorosuchus somnii, gen. et sp. nov., based on a nearly complete skeleton from the Zhuganpo Member (Ladinian [241–235 Ma]) of the Falang Formation, Yunnan, China. Our phylogenetic analyses suggest that Litorosuchus is a stem archosaur closely related to the aberrant Vancleavea just outside of Archosauria. The well-preserved skeleton of L. somnii bears a number of morphological characters consistent with other aquatic-adapted tetrapods including: a dorsally directed external naris, tall neural spines and elongate chevrons in an elongated tail, a short and broad scapula, webbed feet, long cervical vertebrae with long slender ribs, and an elongated rostrum with long and pointed teeth. Together these features represent one of the best-supported cases of a semi-aquatic mode of life for a stem archosaur. Together with Vancleavea campi, the discovery of L. somnii demonstrates a growing body of evidence that there was much more diversity in mode of life outside Archosauria. Furthermore, L. somnii helps interpret other possible character states consistent with a semi-aquatic mode of life for archosauriforms, including archosaurs.

Etymology: From Latin litoralis, indicating the coastal region where the archosauriform may have lived and Greek soukhos crocodile. From Latin somnium —“dream” in reference to a dream the first author (Li) had the day after he searched for a name for the animal, in which he saw an archosauriform wandering on the beach. 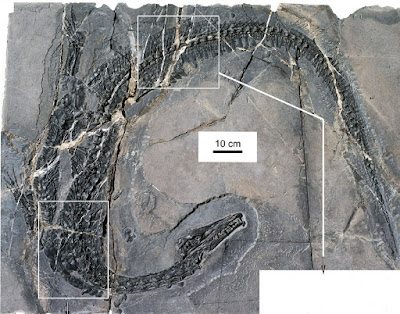 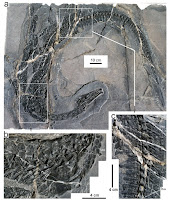 Holotype: IVPP V 16978, a nearly complete skull and skeleton embedded in a slab of limestone with much of its right lateral side exposed.

Diagnosis: A medium-sized reptile (snout to tip of the tail length = ∼2.0 m), differing from other non-archosaur archosauriforms in having the following unique combination of character states: premaxilla bearing only two anteriorly positioned teeth with a short diastema anterior to and a long diastema posterior to the teeth, respectively; posterodorsal (maxillary) process of the premaxilla long and extending just posteriorly; nasal process of the premaxilla extending posteriorly beyond the posterodorsal margin of the external naris; large caniniform tooth in each tooth-bearing bone (shared with V. campi); midline length of the snout (measured from anterior edge of the orbit to the anterior tip of the premaxilla) more than twice that of the post-snout region (shared with species of Chanaresuchus, Q. mixtus, and D. fuyuanensis); T-shaped prefrontal with an elongate and bar-like descending process extending as ventrally as the lacrimal; lacrimal excluded by the prefrontal from the orbit; interfenestral region of the skull roof very narrow, less than one fifth of interorbital width; body completely covered by variously shaped osteoderms in certain regions (e.g., spine-like dorsal osteoderms on caudal vertebrae 10 to 13); tail long, about 60 % of the total length; vertical ridge present on the lateral surface of the neural spine of caudal vertebrae 9 to 35; cervical ribs slender and elongate; astragalus-calcaneum contact a simple butt joint, calcaneal tuber nearly absent. Asterisks denote autapomorphies. 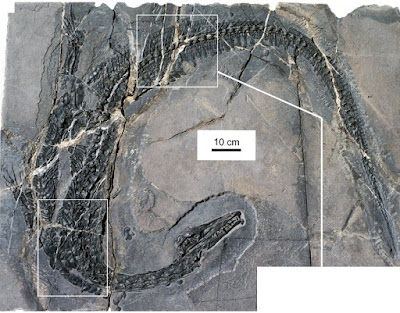 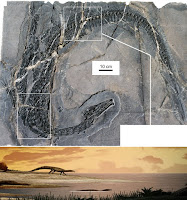 Chun Li, Xiao-chun Wu, Li-jun Zhao, Sterling J. Nesbitt, Michelle R. Stocker and Li-Ting Wang. 2016.  A New Armored Archosauriform (Diapsida: Archosauromorpha) from the Marine Middle Triassic of China, with Implications for the Diverse Life Styles of Archosauriforms Prior to the Diversification of Archosauria.
The Science of Nature [Naturwissenschaften].  103: 95. DOI: 10.1007/s00114-016-1418-4 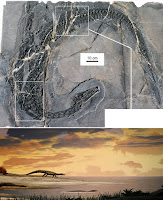 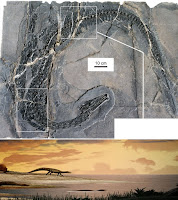