The East Melanesian Islands have been a focal area for research into island biogeography and community ecology. However, previously undescribed and biogeographically significant new species endemic to this region continue to be discovered. Here we describe a phylogenetically distinct (~20% divergence at the mitochondrial ND2 gene) and biogeographically disjunct new species of gecko in the genus Gehyra, from the Admiralty and St Matthias Islands. Gehyra rohan sp. nov. can be distinguished from all congeners by the combination of its very large size, ring of bright orange scales around the eye, moderate degree of lateral folding on the limbs and body, and aspects of head, body and tail scalation. Molecular data indicate mid to late Miocene divergence of the new species from nearest relatives occurring nearly 2000 kilometres away in Vanuatu and Fiji. Large Gehyra have not been recorded on the intervening large islands of the Bismark Archipelago (New Britain and New Ireland) and the Solomon Islands, suggesting this dispersal pre-dated the current configuration of these islands, extinction in intervening regions, or potentially elements of both. Conversely, low genetic divergence between disjunct samples on Manus and Mussau implies recent overseas dispersal via either natural or anthropogenic means. 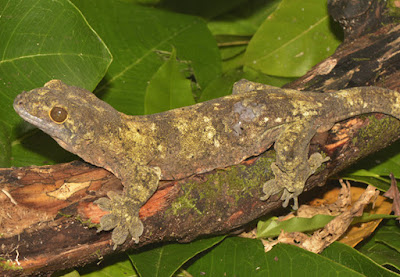 Diagnosis. Gehyra rohan sp. nov. is distinguished from other Gehyra species by the following suite of characters: very large size (adult SVL 130–150 mm), large head (HW/SVL 0.18–0.22, HD/SVL 0.11–0.14), prominent skinfolds on the anterior forelimbs and posterior hind limbs, weak lateral fold, heterogeneous dorsal scalation consisting of large rounded scales bordered by numerous much smaller rounded or triangular scales, massive digital discs with high number of wide undivided subdigital lamellae (finger IV 23–25, toe IV 22–26) that are not deeply notched or divided, rostral with near horizontal dorsal edge and not deeply notched, precloacal and femoral pores in a moderately long single continuous chevron of up to at least 40 pores, original tail without lateral serrations, slightly compressed and with a prominent medial row of enlarged subcaudals, and a prominent ring of orange scales around the eye in life 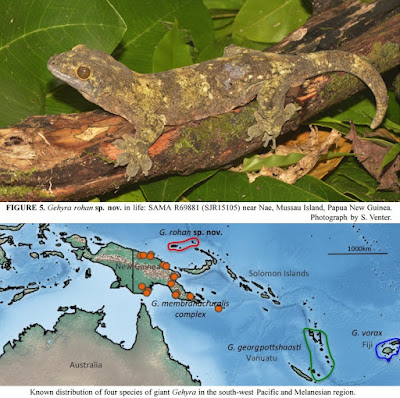 Distribution and ecology. Gehyra rohan sp. nov. is recorded from several localities across Manus Island. While most type material is from the east, one author (SJR) observed a very large Gehyra that is most likely this species at in lowland rainforest at Yeri River (2.001S, 146.819E) in north-western Manus (Fig. 6). Older material has also been collected from nearby Los Negros Island (see paratypes). This species has also been recorded from a single site on Mussau Island. The extent of its distribution, if any, beyond these islands remains unknown. Beckon (1992) reported a large Gehyra supposedly from Nauna Island near Manus (UPNG 5772), but noted that as it was collected from a banana box so its ultimate provenance was uncertain. Based on morphology, especially its high number of pores (62) Beckon further suggested that this animal is consistent with specimens from Fiji. Given uncertainty about provenance and morphology at this stage do not consider this a confirmed record of Gehyra rohan sp. nov.

Gehyra rohan sp. nov. appears to be largely arboreal and is generally found in primary or disturbed lowland tropical rainforest (Fig. 6) on the trunks of large trees. It is also found on around human habitation in forested areas. Three of the authors (MJ, JRC, PT) found it to be reasonably common around Yiringou village in the interior of Manus, and two specimens were found on the same night on wooden beams below houses. The holotype was found running across a road in forest at night. The specimen from Mussau was found in a cave in disturbed forest close to the coast.

One paratype (CAS 252881), from forest on the bluffs above the Lorengau River, that was initially ~6 meters high on the trunk of a tree, “glided” approximately 3 meters to an adjacent tree trunk when disturbed. Similar gliding or parachuting behavior has been observed in Gehyra mutilata (Heyer & Pongsapipatana 1970), and in numerous other genera of arboreal lizards, including many that lack obvious adaptations for gliding (McGuire & Dudley 2011).

Eytmology. Rohan is the Sohoniliu Village (Nali language) ‘tok ples’ (local language) name for this gecko. The community of Sohoniliu Village requested that this name be used for the formal description of this species, and we thank them for their support of this work. 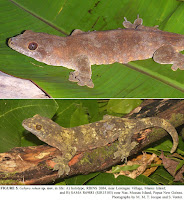 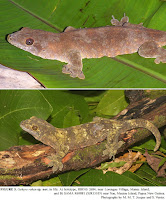