A new species of the terrestrial orchid genus Nervilia is described and illustrated from material collected at several localities in the Greater Mekong region of Southeast Asia. The multi-flowered inflorescence bearing relatively large flowers with a pubescent lip, and the many-veined, cordate-reniform leaf blade that is held well above ground level, place Nervilia mekongensis in section Nervilia. Despite being superficially similar to N. aragoana, a widespread species of tropical Asia and Australasia, it is most closely affiliated to N. fordii, a species known from southern China and Thailand. It is distinguished by its stout inflorescence and lip that is broadest midway along the hypochile and which has acute, forward-projecting side-lobes and a short, ovate mid-lobe. A conservation assessment plus taxonomic notes are provided. 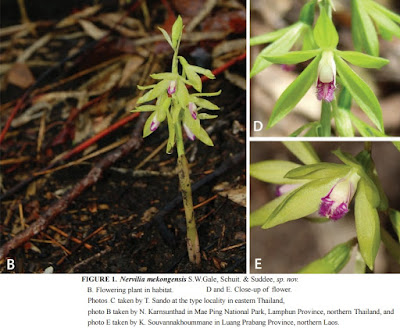 Ecology:— At the type locality in eastern Thailand, Nervilia mekongensis grows in dry deciduous forest dominated by Shorea siamensis. In northern Thailand and Laos, it occurs in dry deciduous forest on limestone, and in Cambodia it is found in open deciduous forest, growing together with the terrestrial orchids Eulophia spectabilis (Dennst.) Suresh and Geodorum siamense Rolfe ex Downie. In Vietnam, it grows in open secondary scrub and grasslands at the edge of disturbed forest on eroded limestone ridges. It is known throughout an elevational range of 250–1,000 m.

Phenology:— Flowering April to June, in leaf from July until November.

Etymology:— Named for the Mekong River, which flows through all four range countries and supports the enormous biodiversity of the region. 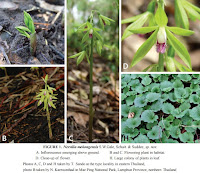