ABSTRACT
Six taxa of Elettariopsis Baker (Zingiberaceae) were previously accounted for Thailand. In this paper, Elettariopsis wandokthong, a new species from Thailand, is described and illustrated. Also, the distribution of E. monophylla (Gagnep.) Loes. in Thailand is reported here for the first time with full description and illustration. Key to species currently enumerated for Thailand is also provided. 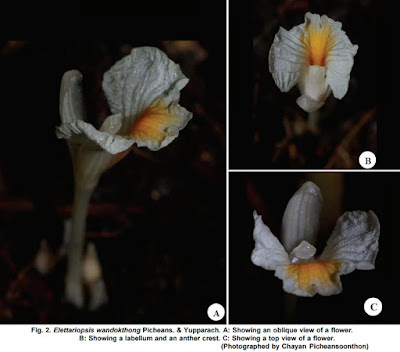 Ecology: The new species grows under the shade of dried deciduous forest, at the altitude of 62-240 m.

Ethnobotany: This new taxon is believed to process a magical power, and therefore, it is used as a good-luck charm. The Thai names imply magical seductive power. The plants are grew in pots, and put in front of shops believing that they will help attracting customers, especially when the plant is in bloom (usually as early as January to early May). The rhizomes of this taxon are also used as one of the ingredients for making “magical herbal charming oil” or “magical charming lip balm”, believing that after applying it to one’s body (oil) or lips (lip balm), it will help attracting the targeted opposite sex, particularly women.