The family Chasmocarcinidae Serène, 1964, is revised based on the examination of the type material of many of its species as well as unidentified and previously identified material from around the world. The revised family now consists of three subfamilies comprising 16 genera (including eight described as new) and 51 species (including 19 described as new).

The subfamily Megaesthesiinae Števčić, 2005, consists of Alainthesius n. gen. with two species, both of which are new; Megaesthesius Rathbun, 1909, with four species, one of which is new.

Thirteen chasmocarcinid genera are exclusively found in the Indo-West Pacific region, one (Chasmocarcinus) in both the Western Atlantic and Tropical Eastern Pacific regions, and two (Deltopelta n. gen. and Amboplax n. gen.) exclusively in the Western Atlantic. Chasmocarcinids are remarkable for occurring from depths exceeding 1000 m to shallow water and completely freshwater habitats: chasmocarcinines and megaesthesiines are found from shallow to deep water marine ecosystems, whereas trogloplacines live in freshwater streams, including cave systems. 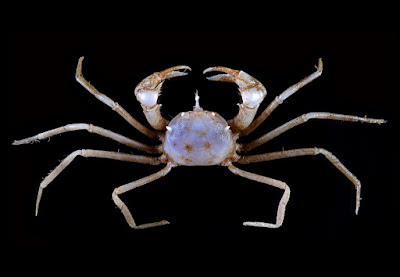 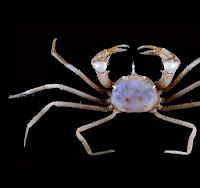