Abstract
Araichthys loro, a new genus and species of the suckermouth armored catfish family Loricariidae, is described from the rio Papagaio and tributaries, rio Tapajós basin, Mato Grosso State, central Brazil. Araichthys is distinguished from all other genera of the Ancistrini by features of body and head plates, odontodes of breeding males, and osteology, and by the absence of an Adipose fin. A phylogenetic analysis of morphological characters obtained Araichthys as part of a monophyletic group that also includes Pseudolithoxus, Ancistrus and Lasiancistrus based on the presence of a large gap with a strut between the anterior process of the pterotic-supracleithrum and its main body, three rows of plates at thinnest part of caudal peduncle, fleshy tentacles on snout with a sheath partially detached from odontodes, and small tentacles on pectoral fins partially detached from odontodes. 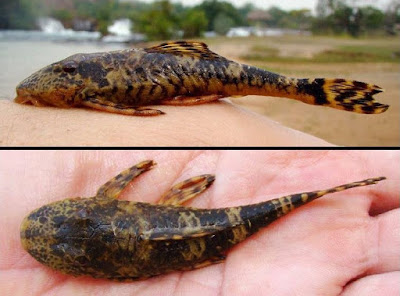 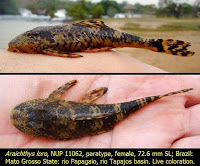