Abstract
We present the taxonomic description of Tarumaniidae, a new family of South American freshwater fishes including a new genus (Tarumania) and species (Tarumania walkerae) from the Central Amazon. The new taxon displays an extraordinary set of unique characteristics, which sets it apart from all other known bony fishes, either in South America or elsewhere. Tarumaniidae has reverse-imbricated scales on the head, 244 or more scales along the midlateral lateral series, an 11-chambered swimbladder extending along most of the body, an anteriorly deflectable pelvic fin and a platybasic skull, among other unusual traits. Although the general habitus of Tarumania gives little hint of its phylogenetic placement, examination of internal anatomy is largely elucidative concerning the main features of its relationships. For example, Tarumania has a complete Weberian apparatus, comprising a set of characteristics supporting its position in Otophysi and Ostariophysi. Additional comparative evidence corroborates its placement in the order Characiformes, including some trademark characiform synapomorphies such as the presence of a hypertrophied lagenar capsule. We conducted a phylogenetic analysis on the basis of previously published morphological evidence for Characiformes, with the inclusion of Tarumania and additional relevant taxa and characters. Results support the position of Tarumania as a part of the superfamily Erythrinoidea and sister group to the neotropical Erythrinidae. Our increased taxonomic representation of Erythrinidae in the matrices firmly corroborates Tarumania as sister group to the whole of Erythrinidae and not to a subgroup of that family. Tarumania walkerae is a predator, which inhabits vast leaf-litter deposits in the Rio Negro drainage, and is found deeply buried in isolated pools during the dry season. It is the first characiform with an anguilliform body shape and fossorial habits. The unprecedented combination of phenotypic traits, behaviour and habitat adds substantially to the larger picture of freshwater fish diversity. Although its microhabitat is difficult to sample, the geographical range of T. walkerae includes areas close to major urban centres and which have been ichthyologically surveyed for many years. The fact that a relatively large and highly distinctive fish such as Tarumania remained undiscovered until now is testimony to the still-incomplete state of knowledge of biodiversity in Amazonian waters.

Etymology: From the river Tarumã-Mirim, tributary of the lower Rio Negro, first known locality of the new taxon. A noun in nominative singular. Gender feminine.

Etymology: The specific name honours eminent limnologist Ilse Walker [Instituto Nacional de Pesquisas da Amazônia, Manaus (INPA)], not only for her lifelong contribution to the knowledge of Amazonian ecology but also for having collected the first (and for some years, only) known specimen. The epithet is a noun in the genitive feminine case.

Geographical distribution: So far endemic to the Rio Negro basin, from the Rio Tarumã-Mirim, tributary to the Rio Negro near the city of Manaus, and from the Anavilhanas archipelago, on the main Rio Negro (Fig. 11). The two localities are ~60 km apart in straight line.

Ecological notes All specimens known of Tarumania walkerae were collected deeply buried into massive leaf-litter deposits in isolated pools in the riparian forest. .... 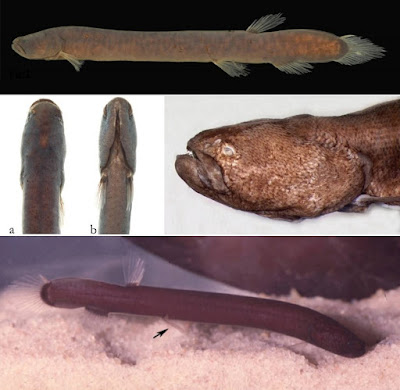 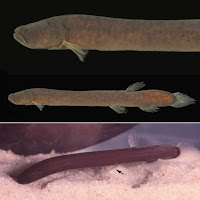