Abstract
Genuine fossils with exquisitely preserved plumage from the Late Jurassic and Early Cretaceous of northeastern China have recently revealed that bird-like theropod dinosaurs had long pennaceous feathers along their hindlimbs and may have used their four wings to glide or fly. Thus, it has been postulated that early bird flight might initially have involved four wings (Xu et al. Nature 421:335–340, 2003; Hu et al. Nature 461:640–643, 2009; Han et al. Nat Commun 5:4382, 2014). Here, we describe Serikornis sungei gen. et sp. nov., a new feathered theropod from the Tiaojishan Fm (Late Jurassic) of Liaoning Province, China. Its skeletal morphology suggests a ground-dwelling ecology with no flying adaptations. Our phylogenetic analysis places Serikornis, together with other Late Jurassic paravians from China, as a basal paravians, outside the Eumaniraptora clade. The tail of Serikornis is covered proximally by filaments and distally by slender rectrices. Thin symmetrical remiges lacking barbules are attached along its forelimbs and elongate hindlimb feathers extend up to its toes, suggesting that hindlimb remiges evolved in ground-dwelling maniraptorans before being co-opted to an arboreal lifestyle or flight. 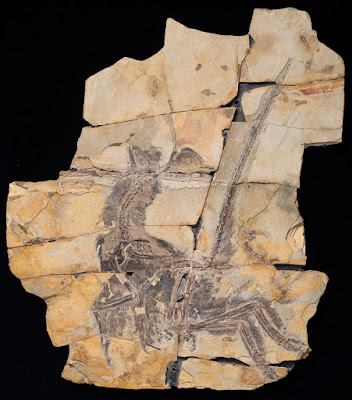 Etymology: Serikos, ancient Greek for silk, because the body is almost covered with plumulaceous-like feathers; Ornis, ancient Greek for bird; named in honour of Sun Ge, for his contribution to our knowledge of Jurassic and Cretaceous ecosystems in Asia.

Holotype: PMOL-AB00200 is a single complete articulated skeleton with associated integumentary structures preserved on a slab. The counterpart is missing, but most of the skeleton is preserved on the main slab.

Diagnosis: Serikornis is characterized by the following combination of characters (autapomorphies are marked with an asterisk): four anterior maxillary teeth twice as long as the others regarding the crown height*; coracoid tuber well-developed and laterally projected from the lateral margin of the coracoid and forming a subglenoid shelf along the caudoventral margin of the bone; the distal end of the lateral process of the coracoid is thicker than the proximal part and forms a ventral rounded bump; ventrodistal process of ischium narrow, hook-like, strongly deflected caudodorsally and set at the distal end of the ischium*; smooth ventral side of coracoid devoid of small pits. 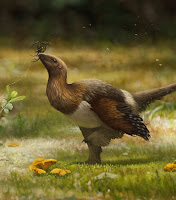 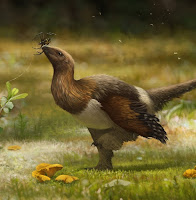